A stunning Conan Byrne free kick secured a point for St Patrick’s Athletic as Limerick FC gave up a 2 goal lead at the Markets Field on Saturday evening.

Limerick changed back to a 4-4-2 for the game with Shane Tracy returning to the starting side at left back.

The extra man in midfield for Liam Buckley’s side made it difficult for Limerick throughout the game, as Neil McDonald’s side struggled for possession.

It took the home side 15 minutes to get into the game. Shane Tracy, had the first chance, as his free kick from 25 yards out just skimmed the post.

Then came the opening goal from a Limerick counter attack. Chiedozie Ogbene was played through by Lee J Lynch. The frontman cooly dispatched his finish past O’Malley into the bottom right corner after 17 minutes.

After that Limerick had a good chance to go two up but Rodrigo Tosi failed to keep his header on targer from a Lee J Lynch cross – the Brazillian should maybe have left it to David O’Conor who was in a better position just behind him. 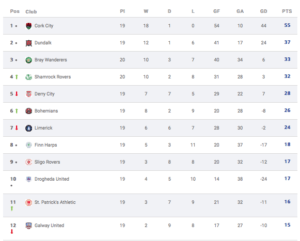 It was St Pat’s who were the more dominant side for the rest of the first half, as they pushed for an equaliser but failed to create many clear chances.

Just before the break Limerick captain Shane Duggan had an opportunity to give his side a two goal cushion. The midfielder burst through the Saints’ defence but his powerful shot was straight at Conor O’Malley, who was able to deal with it.

It was the away side started the brighter in the second half as Darragh Markey and Conan Byrne both caused problems for the home defence.

However, it was Limerick who again found the back of the net against the run of play.Tosi was fouled by Gavin Peers in the penalty area. The striker stepped up and calmly converted his spot kick to give Limerick a 2 goal cushion after 60 minutes.

It didn’t take long for a response from Pats’ as captain Ian Bermingham headed home as he got on the end of a superb Jonathon Lunney cross three minutes later.

While Conan Byrne secured an away point for his side in the 74th minute as his curling free kick sailed past Brendan Clarke into the top right corner.

Limerick had two good chances in quick succession to take all three points in the closing stages, as Dean Clarke and Ogbene both tested O’Malley late on but the St Pat’s ‘keeper did well to keep them out.