Limerick FC picked up a vital win over Bohemians at the Markets Field on Saturday night. A 10th minute penalty from top scorer Rodrigo Tosi was enough to secure the victory.

Limerick began with a real purpose and a clear motivation to end the poor recent run which has seen the Shannonsiders slide closer to the bottom three places in the league. In the opening stages, Chiedozie Ogbene proved a handful for Bohemians. The lively winger was played through on goal by opposite winger Stephen Kenny but he drove his effort straight at Shane Supple.

Shortly afterwards, Limerick were awarded a penalty after Rodrigo Tosi was hauled down by centre-back Cornwall when the Brazilian was attempting to head a Stephen Kenny cross. Tosi stepped up and smashed his penalty straight down the middle of the net to give the home side the lead.

The Brazilian was causing Cornwall a lot of problems early on. He shrugged off the defender’s challenge before drawing a save from Supple who also denied Lee-J Lynch from the rebound.

Tosi’s strike partner Peter Berki glanced a header wide from an inswinging Lynch free-kick delivery as the home side looked to maintain the early pressure they exerted.

Just after the half hour mark, Bohemians were awarded a penalty of their own as referee Jim McKell penalised Joe Crowe, who was adjudged to have brought Ismaeil Akinade down after a Keith Ward free-kick. However, captain Brendan Clarke saved George Poynton’s resulting spot-kick.

Limerick’s set-piece troubles almost cost them once more as Dan Casey won a flick on at the near post from a Keith Ward corner but Ciaran O’Connor could not connect cleanly when he was placed on the goal line.

Limerick had youthful centre-back Barry Cotter to thank for preserving their lead, as the u-19s graduate denied Ciaran O’Connor who had been played clean through, with a superbly timed sliding tackle.

FULL-TIME: #LimerickFC 1-0 @bfcdublin. HUGE win for Limerick here at the Markets Field thanks to Rodrigo Tosi's early penalty. Back to 7th. pic.twitter.com/Es6BJv7zEt

As Bohemians searched for the equaliser, Limerick winger Chiedozie Ogbene was afforded more room but the winger elected to swivel inside Derek Pender when played through on two occasions but the experienced campaigner dispossessed Ogbene on both occasions.

Approaching the last quarter of the game, Limerick substitute Garbhan Coughlan beat the offside trap and drilled the ball across the six-yard box but it evaded both Ogbene and Tosi.

Limerick had a litany of chances as the game wore on with Bastien Hery, Lee-J Lynch and Tosi all wasting good opportunities for the Shannosiders.

As the game entered the final five minutes, Bohemians had a fantastic opportunity to equalise as Akinade drove to the by-line before squaring to Ian Morris who blazed his shot over the bar from inside the penalty area.

Limerick suffered one last nervy moment as Lorcan Fitzgerald’s dangerous cross had to be cleared at the back post by David O’Connor. However, The Super Blues managed to run the clock down efficiently in injury time to avoid any consistent Bohemians pressure as referee Jim McKell called time on proceedings. 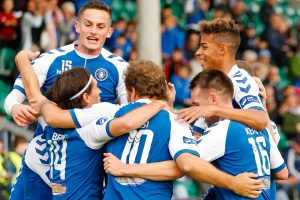 It is a massive victory for Limerick and a huge relief for Neil McDonald. The Limerick manager will be delighted with the clean sheet and with the way his side defended for the most part.

Furthermore, on another night the home side could have scored at least three more goals as Ogbene’s pace terrorised Bohs’ defence. However, the young winger will need to improve on his decision making and end product.

The result means Limerick move four points clear of the final relegation place while moving six points ahead of Galway United. Limerick also move back to seventh place and are now just two points behind opponents Bohemians in sixth place.

Joyous scenes here at the Markets Field as the players leave the field. pic.twitter.com/aYd398AOWs

Next Saturday Limerick face Finn Harps in the FAI Cup last sixteen tie. The game will kick-off at 6.30 at the Markets Field.

Catch up with the post match analysis with Alan O’Brien, Noel O’Connor and Sporting Limerick’s Adrian Finnin on the link below.