At the beginning of the 2017 Airtricity League Premier Division season, many outsiders believed Limerick FC would survive comfortably, mainly due to the emphatic nature with which the Shannonsiders won the First Division title in 2016.

Furthermore, an EA Sports Cup final appearance along with the signings of Tommy Robson, Bastien Hery and Dean Clarke among others, raised expectations among Limerick supporters and the league in general.

The first night of the campaign did little to quell the aforementioned optimism. A Martin Russell led Limerick side comprehensively beat Sligo Rovers, who had finished fifth the previous season, by five goals to one. A week later, Limerick took the lead at Maginn Park against Derry before the game was abandoned at 1-1 due to floodlight failure.

The next challenge awaiting the newly promoted club would be a daunting trip to serial league winners Dundalk at Oriel Park. Limerick acquitted themselves extremely well on the night, despite a 1-0 defeat courtesy of a Patrick McEleney thunderbolt.

The home supporters appeared to be impressed by the visitor’s bravery in possession which was rarely witnessed by the Dundalk faithful in recent seasons. Generally, travelling teams would attempt to sit deep and avoid embarrassment at Oriel Park.

Up to this point, everything appeared to be positive within the Limerick camp. However, fast forward two weeks and cracks in the armory, which were all too prevalent under Martin Russell in his last premier division campaign in charge of Limerick, began to appear once more. 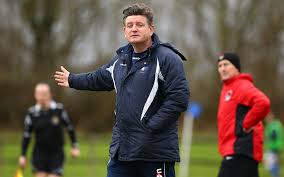 Obviously, due to Limerick’s relatively impressive start to the campaign, opposition managers began to take notice in a bid to stifle Russell’s progressive game plan.

Bohemians manager Keith Long was the first to start a trend which frustrated the Markets Field outfit. The Gypsies arrived in Garryowen and decided to press high up the pitch in a bid to force mistakes from a previously leaky defensive unit in seasons gone by.

Realising that Brazilian striker Rodrigo Tosi lacked the pace to threaten in behind, Bohemians’ back four pushed right up near the halfway line. As a result, the midfield trio of Shane Duggan, Bastien Hery and playmaker Lee-J Lynch were suffocated and coughed up possession all too frequently.

Under Russell’s guidance, Limerick rarely if ever, showed capabilities of change when games were clearly going against them. Throughout the night, Limerick continued to pass the ball aimlessly across the back four in a bid to create space for deep lying midfielder Shane Duggan to receive possession. However, the high-press employed by Bohemians was hugely successful and they denied their opponents the chance to apply any sustained pressure in the final third.

Five days later, the Super Blues entertained Finn Harps at the Markets Field. The Donegal club bring back terrible memories for many Limerick supporters as Ollie Horgan’s men were promoted at the expense of the club in Finn Park in 2015. The Ballybofey outfit, like Bohemians before them, employed the high press with Ciaran O’Connor and Sean Houston leading from the front.

The resulting pressure forced under fire Bermudan goalkeeper Freddy Hall to present Finn Harps with the opening goal. Rodrigo Tosi rescued a point for the home side but Martin Russell’s insistence to play high risk football from defensive positions with no plan b, ensured that the pressure was mounting on the former UCD boss.

Limerick responded positively with a victory over a fancied Bray Wanderers at the Carlisle Grounds. The team were resolute and the defensive solidity on show was encouraging. The performance certainly differed from many previous Martin Russell led displays.

The travelling blue army were delighted with a rare clean sheet and the fact that their side fought exceptionally hard to maintain it at the expense of attacking flair. The introduction of the experienced Brendan Clarke in place of the underperforming Freddy Hall in goal was another positive and overdue decision.

However, the visit of runaway league leaders Cork City highlighted all that was wrong with the current management’s approach. Limerick were easily defeated 3-0 by the Leesiders in the Munster derby.

Although Cork had dispatched of every opponent thus far, it was the manner of the defeat and performance in front of over 2000 spectators which angered the home support and the Limerick hierarchy.

As Cork legend Dave Barry stated on Soccer Republic, this clash did not feel like a derby and was all too easy for the Rebels. Paul O’Conor and Shane Duggan were exposed in the holding midfield role which the latter in particular, was not comfortable with.

Dubliner Martin Russell and Limerick parted company after the Cork game by mutual consent. It was evident that the club were in search of a different approach, certainly a more direct approach.

Limerick Academy Director and native Willie Boland has stepped in on a temporary basis. His first game in charge against St. Patricks Athletic at Richmond Park would be just three days after his appointment.

As expected, little change occurred in such a short period of time. Last season’s joint top scorer Chris Mulhall replaced Ian Turner on the wing in the only change. Limerick emerged victorious with a 0-2 scoreline. However, tactically, Limerick approached the game in a similar manner to the previous regime. 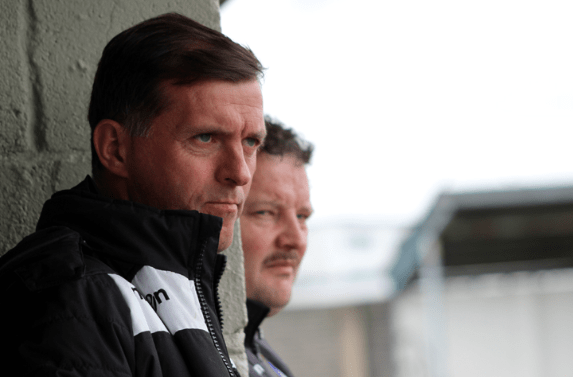 Boland has taken charge of five games which has brought two victories and three draws. The club have only conceded three goals during his reign.

Full-backs Tommy Robson and particularly Shaun Kelly, are comfortable concentrating on the defensive aspect of their performance firstly. Both full-backs have performed well under Boland. However, the positional switch of Shane Duggan, to allow the former Plymouth Argyle youth player to affect the play higher up the pitch, has proved an inspired move by the coaching staff.

The former Cork City player was at his best for Cork as a box to box midfielder and seemed to be restricted under Russell, placed in a role filled with defensive responsibility. His performances against Drogheda and Derry were testament to the reasons for the change.

Furthermore, newly acquired winger Chiedozie Ogbene has been a real success story in recent times. Ogbene’s direct style will always excite fans but he has also added an end product with assists and goals beginning to come.

There is no doubt that the former Cork City man needs to work on his decision making, which is a given with a young player. However, the potential is certainly there as we were already aware of. The winger’s work rate has made him a fans favorite in recent weeks.

The resilience shown by Limerick in draws away at Derry and Shamrock Rovers in the space of three days, is potential evidence that the defensive naivety and soft centre may be a thing of the past for the Super Blues faithful.

The weekend fixture against Sligo Rovers at the Showgrounds is rumoured to be Boland’s last game in charge. If this is the case, The former Cardiff City midfielder has certainly left the team in a good place as they sit in fourth place in the table heading into the game. Certainly, at the start of the season, anyone involved with the club would have jumped at the chance to be challenging for a European place after the first series of games.

It is hard to predict how the new manager will approach the job on Shannonside. It is rare that a new manager comes in to a financially stable club and a team performing well in the league. The club boasts the fourth highest attendance in the Airtricity League after Cork City, Dundalk and Shamrock Rovers.

Expectation is high in Limerick currently, even though realistically, surviving the three-team relegation battle would allow for the clear potential to be developed in the near future. However, with the departure of Martin Russell and the performance of the team thus far, it is clear that the club have bigger ambitions and targets which must be met by the new boss.

There was 12 goals shared between the three fixtures that took place on the second day of the ...
Read More →