Champions in waiting Cork City made it 17 wins from 18 games with a comfortable 4-1 win in a disappointing Munster derby at Turners Cross last Friday evening.

John Caulfield’s side further exerted their dominance over Limerick having already beaten them in both the League and EA Cup.

As has happened all to regularly this season, Limerick gave away some cheap goals and against a team of Cork’s quality, mistakes will be punished.

The win sees Cork on 52 points a whopping 18 points clear of Dundalk in second while the defeat leaves Limerick FC sixth in the Premier Division table and seven points clear of the drop zone. 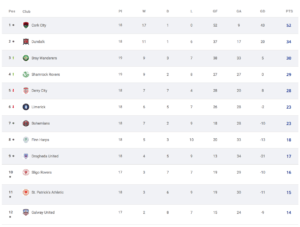 Following the midseason Summer break, Neil McDonald made three changes to the side that defeated Bray 5-3 two weeks ago at the Markets Field.

Sean Maguire opened the scoring on 24 minutes when he found himself one  ht pend of a Karl Sheppard cross and headed home from close range.

Stephen Dooley’s unstoppable effort edged Cork back in to the lead just before half time to give his side a deserved 2-1 lead at the interval.

The message at half time for Limerick would have been to keep it tight and give nothing away, trailing by only a goal, Limerick were in with a shout of taking something from the game.

Hopes of taking something from the tie evaporated within 16 seconds of the restart as Preston bound Sean Maguire pounced on an underhit Robbie Williams back pass to round Brendan Clarke and make it 3-1.

As the visitors toiled in vain to claw their way back into the game, Jimmy Keohane drilled a stunning effort past Clarke courtesy of a little half from the post.

Next up for Limerick is a crucial clash with second-from-bottom St Patrick’s Athletic at the Markets Field on Saturday, June 24 at 6.30pm.

Neil McDonald will know that defensively, his side will have to improve, the concession of 7 goals in the last two games alone is alarming and defence has been the Superblues’ Achilles heel this year.