Limerick FC defeated Drogheda United 0-2 at United Park courtesy of two headed goals from Robbie Williams and Garbhan Coughlan. The victory sees Neil McDonald’s side return to the top-half of the table.

Limerick began the game well and were denied the lead in the opening ten minutes as pressure from Chiedozie Ogbene forced Luke Gallagher to turn the ball into his own net after clever work from Dean Clarke. However, Ogbene was adjudged to have been in an offside position.

Just three minutes later, the Shannonsiders did take the lead as Robbie Williams headed home from a Lee-J Lynch free-kick. The linesman appeared to flag for offside but was overruled by the referee.

Approaching the half hour mark, Drogheda’s first chance of note fell to Ryan Masterson but his weak header caused no trouble to Brendan Clarke.

The home side came close to an equaliser when Ciaran McGuigan rose highest to meet a rare cross from Sean Brennan which forced a great save from the experienced Brendan Clarke who palmed the ball to safety.

At the beginning of the second-half, good build up play by Limerick resulted in a poor Dean Clarke effort which sailed wide of Stephen McGuiness’ goal.

In a dull game, Drogheda’s Mark Doyle’s speculative shot from 20 yards hit the side netting.

With five minutes remaining, the visitors extended their lead as substitute Garbhan Coughlan capitalised on numerous errors from Drogheda including goalkeeper Stephen McGuinness to head the ball over the Drogheda man from a long clearance.

Limerick managed to close out the game effectively and kept a clean sheet which Neil McDonald will certainly be pleased about. The Super Blues now return to sixth place in the Airtricity League Premier Division table. 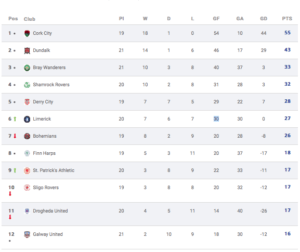 The Limerick native joins Jack Lynch and Joe Collins who announced their departures in October. Treaty United have ...
Read More →

There was more silverware handed out this weekend, with Rathkeale getting their hands on the Premier Division League ...
Read More →