Clare prove too good for Limerick in Munster Semi-Final.

Limerick must yet again negotiate a path through the All-Ireland hurling qualifiers if they are to feature in the business end of the 2017 season.

A final score of Clare 3-17 to Limerick’s 2-16 means the banner county will now progress to play the winners of Cork and Waterford in the Munster final.

John Kiely’s men paid the price for some errors – often self inflicted – and some some poor shot selection.

Two Shane Dowling frees had Limerick ahead in the early stages before Clare wrestled total control of the game.

Their opening goal came in the 5th minute when a Kyle Hayes pass intended for Dan Morrissey was picked off. Clare moved the ball quickly and launched a high ball into the Limerick square. 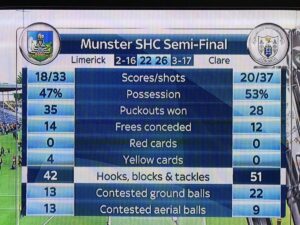 Richie McCarthy and Nickie Quaid went for the same ball but only succeeded in batting the ball down into the path of the onrushing Shane O’Donnell who ruthlessly punished Limerick’s indecision.

The Éire Óg man struck again five minutes later. Again Limerick’s full back line failed to clear their lines and the sliotar broke kindly for O’Donnell who made no mistake.

Clare led by 2-2 to 0-3 with under a quarter of an hour gone and looked the more dangerous side. Their play was slicker and faster, they seemed to have more time on the ball while Limerick looked laboured and sluggish.

Limerick didn’t score from play for the first twenty minutes but when the finally found their range, they were impressive. A five minute flurry yielded 1-5 and levelled the scores.

GAANOW has all of today's best moments in one place.

A series of positional changes and the decision to simply run at the Clare defence reaped the rewards. Peter Casey starting the scoring sequence with a fine point before Cian Lynch chipped in with a brace.

Kyle Hayes then decided to put the head down and bore down on the Clare goal. Andrew Fahy could only parry his shot but David Dempsey was on hand to finish the rebound.

A Shane Dowling free and a Paul Browne point levelled the scores at 1-8 to 2-5 in the 25th minute.

Having fought so hard to erase Clare’s 8-point lead Limerick again slacked off, failing to register another score in the first half. Instead Clare finished stronger with  Conor Cleary, O’Donnell and John Conlon adding points to give the banner a 3 point lead at the break.

No score from play for the first 20 minutes, 1-5 from the 20th to the 25th minutes, no score again for the remainder of the half plus 11 wides made for frustrating watching.

When Limerick were at it they were impressive but a propensity to switch off for extended periods proved their Achilles heel.

Limerick restarted following the interval break with scores from Dempsey and sub Barry Nash before Clare hit their third goal in the 50th minute.

Again Limerick’s defence was found wanting as Conor McGrath found himself completely unmarked in the Limerick square and connected on the end of Colm Galvin’s delivery to finish past Nicky Quaid.

Shane Dowling responded with a free but three scores without reply re-opened Clare’s eight-point lead, two from Reidy frees, and another point from substitute wing back Jason McCarthy.

John Kiely’s side responded with three scores, reducing the deficit to five points before Seadna Morey halted their momentum with fine point.

Tony Kelly who had bad day at the office pulled a penalty wide before a fine Kyle Hayes goal gave Limerick the faintest of hopes in the dying stages.

It wasn’t to be however as Clare simply had too much for Limerick in the end. On a positive note, Kyle Hayes grew into the game and had and impressive second half while Sean Finn looked assured in then back line.

Clare never hit top gear and just about did enough win whereas Limerick played well in patches but didn’t deliver the required intensity and accuracy over the 70 minutes. 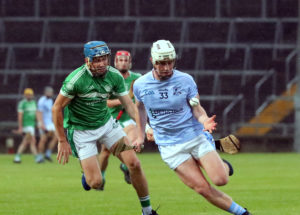