LISTEN: Tyler Bleyendaal looking at the positives ahead of new season

The Munster rumour mill has been active over the Summer. Firstly it was rumours surrounding whether or not Erasmus would leave. When his and Nienaber’s departure was confirmed, attention switched to who would replace the South African at the helm.

One player who has refused to let the off-field uncertainly have any affect on his preparations is Tyler Bleyendaal. Having missed over a year with series of injuries, the former Canterbury player finally got an injury free run at the campaign and Munster fans were certainly impressed with what they saw.

Like Bleyendaal, the Munster faithful will be hoping the out half can pick up where he left off last year as a strengthened Munster side go in search of silverware and an improvement on last year.

Despite the uncertainty surrounding who the next coach will be or when the current one will actually depart, Speaking to reporters at Munster Rugby’s first press meet of the new season, Bleyendaal says the players have put their heads down and worked hard.

“Things have been seamless so far. There has been no debate or hesitation, we just cracked on to the season and I don’t think anyone is feeling any pressure or anxiety about the whole situation”

That seemed to be the general consensus from both players and management at the first press briefing ahead of the new season, that Erasmus departure is not derailing their preparations going into the newly formatted Pro 14 competition.

After coming up short in some big games last year, Bleyendaal is looking to go that bit further for the new campaign and try bring silverware to the province since the 2011 Magners League title.

“As a team we got to a lot of places and we didn’t quite finish the opportunities we had. Personally I was happy to get a really good season of rugby and play many games”

Munster kick off the 2017-2018 season against Treviso on Friday evening with most fans and pundits having it down as a routine victory for the home side. Indeed the bookmakers have Munster at a whopping -30 points on the spread betting or 1/80. Basically the men in red are un-backable and so they should be. If they are to harbour realistic ambitions of a successful year, then Treviso at home is an ideal place to start.

Despite being overwhelming favourites, Bleyendaal is taking nothing for granted from the Italians.

“We’re looking forward to it, I think it’s going to be a great challenge. They looked to have developed a bit and recruited well and they’ve got their internationals around.”

The game will be Munster’s first in the newly expanded Guinness Pro 14, a move that has been generally welcomed by players and fans. For the fans it is a new experience while for the players, a chance to test themselves against a new opponent and environment.

Bleyendaal and his team are excited about the move as Munster will face the Cheetahs next weekend at Thomond Park. The Bloemfontein based side look the stronger of the two South African additions and it will be interesting to see what questions they will ask of Munster at Thomond Park on September 9th. It is a prospect that excites Bleyendaal:

“I’m really excited. Obviously I’ve had exposure in super rugby with the South African teams and I think they’ll provide a pretty exciting challenge, the cheetahs historically have a great attack and they’re a great attacking side.

While there has been uncertainly around the Director of Rugby role, Munster certainly have been proactive on the recruitment front. They got their business done and they got it done early. Munster have strengthened in critical positions with Gerbrandt Grobler coming in in the second row, Chris Cloete in the back row, James Hart at scrum half and Chris Farrell joining the centre ranks along with the return of utility back JJ Hanrahan. 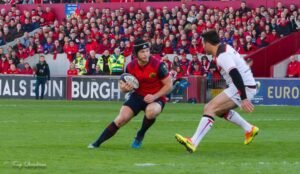 Tyler Bleyendaal in action against Toulouse

Farrell can offer a focal point to the Munster midfield and will complement the bruising Jaco Taute. The former Grenoble player brings a high level of physicality as well as excellent running and handling to the centre position. Bleyendaal is excited about the new attacking weapons that Munster will have at their disposal this year.

“Chris played against Worcester and he was great to play alongside. He is a huge man for a midfield fella. Look he’s pretty exciting and I think he’s going to contribute well.

“I think with James the 9/10 relationship is just learning each others games. He looks  to have all the skills and the work ethic and now we just learn each game kind of how we work things.

“JJ was around when I first turned up and its great to have him back because he’s obviously such  a great guy, but a player at 10 12 that can make decisions and has a great skill set”

So there you have it, the rollercoaster that was last season has barely come to a stop before the current one is calling on the waiting patrons to jump aboard. Munster fans and players cannot wait until Friday night when the 2017/2018 rollercoaster finally starts.

You can hear Bleyendaal talking with reporters on the link below.