“I think we’re going down there with a decent chance”

Limerick GAA fans worst fears were confirmed on Monday morning when Limerick were drawn to face Kilkenny in the opening round of the Qualifiers this Saturday evening in Nowlan Park.

Cody’s men are entering at this stage with the seemingly invincible teams of the past long gone. However, Kilkemny are always a very dangerous threat when they come in under the radar.

Matt O’Callaghan – chief sports writer with the Weekly Observer – gave his take on the Limerick / Kilkenny clash at the weekend. You can hear his thought in full below.

Limerick hurling is certainly not where the supporters or team would like it to be. John Kiely’s side failed to perform in the League, failing to gain promotion, and looking very flat against Clare in the Munster championship.

However the sight of the black and amber jersey should be enough to awaken this Limerick side. With many of the U21 squad who swatted Tipperary aside last week, there should be confidence in the senior set up.

O’Callaghan doesn’t feel that hope is lost for the Limerick cause but understands the difficulties of the game.

“I suppose it’s the draw we would have looked to avoid… Kilkenny in the Gaelic Grounds, we would have fancied ourselves maybe, but I don’t think all is lost in this one.”

“It is what it is. We played Westmeath in the last two years and got over them. It was hard to determine where we were after the Westmeath games on both occasions and that proves to be the case as we went out in the next round.” 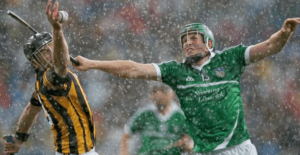 Shane Dowling battles with JJ Delaney in the classic encounter of 2014.

Yet O’Callaghan feels the aura that followed Cody and his players for so many years is fading.

He feels however that the draw for the game should have taken place sooner as Kiely and Cody will only have a couple of days to prepare for what is a knockout tie.

A Limerick win is a possibility however and a win in Nowlan Park could do wonders for the Limerick hurling cause.

“We’ve nothing to lose and Kiely will have his side well primed and well focused, and have covered all eventualities since the Clare game.

I think we are going down there with a decent chance.”