Former UL Bohs women’s treble winning coach Mike Storey on Ireland’s struggles against Japan and what we can expect from the French.

The Irish Women’s rugby team got their second victory of the tournament on Sunday, but it was far from plain sailing which many thought it was going to be. For a time in the second half, the performance evoked painful memories of that ill-fated night in France where Ireland struggled to beat the Georgians at the 2007 World Cup.

Despite their struggles Storey believes Ireland got it right in the second half when it really counted – but only after bringing on a number of their star players and reverting to simple, direct and brutally effective rugby. While Ireland failed to live up to their pre match billing as strong favourites, Japan were irresistible at times in the first half, playing some fluid attacking rugby with a very flat backline consistently making positive yards.

While many were quick to point Ireland’s lack lustre performance, Storey believes that ultimately the result and manner of the win shows great character and Japan should have been given more credit for the manner in which they played.

“They (Ireland) got it together in the second half, played a bit more direct and the players they had on there showed a lot of composure.”

“Bringing on the like of Paula (Fitzpatrick) and the likes of Leah (Lyons)… those were the girls to play through the six nations and you know, they kind of know what’s expected  “

“To be honest, I really liked the way the Japanese played the game, they attacked the line all the time, they ran onto the ball a lot and they attacked with pace… it was kind of what I expected from the Irish team”

Ireland face a whole new challenge on Thursday as they face a very strong French side who have scored over 100 points in their first two games, both against a decent Australian side, and as we already mentioned a Japanese side who are no push overs. The points difference means that only a win will be good enough for Ireland and if the 6 Nations encounter is anything to go by (13-10 win for Ireland) then we could be in for a nervous 80 minutes at the UCD Bowl this evening. 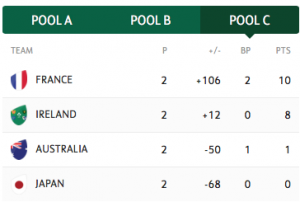 If Ireland are to book a home semi final then Storey believes a change in attacking mentality is needed to unlock a solid French defence. Tom Tierney’s side have found success in their opening pool games via the forwards, a simple yet effective game plan. You must also consider the nature of both games, both games saw Ireland locked in tight tense encounters. When games are tight, the tendency can be to revert to a simpler, lower risk game plan. When Ireland took this route, they found success.

However the New Zealander feels Ireland will need to change how they attack if they want to beat France and move away from a totally forward based game plan.

‘Their backs are to the wall a bit, like they were in the six nations” Storey said about Ireland

“The whole backline sat very deep, that kind of leads you to playing that forward based game”

“I’d like to see her (Nora Stapleton), a bit flatter and that would allow the centres to play off her a bit more… I think it offers more options, it makes defences think a bit more, where I think the Japanese defence, they actually defended quite narrow, because they knew it was going to be a forward based game”

It is a point well made by the Kiwi. The French are easily the most physical of the sides that Ireland will meet in the pool and should Ireland decide to go down the battering ram route, they will likely be met with an in penetrable blue wall. Storey feels if Stapleton and the Irish backs just attack the ball with a bit more pace and come up a bit flatter, along with their strong pack, Ireland can play good rugby and go on to win what is essentially a World Cup 1/4 final.

Storey also makes a valid point about the free scoring French in comparison with their Irish counterparts who have had to “fight” for their wins.

A valid point ahead of the vital Pool C clash that would put the odds in Ireland’s favour due to the gritty nature of their first two wins. However the bookmakers don’t see it that way with many having the French at between 13 and 14 point favourites to win the game and progress.

Whatever scenario unfolds, both sides will be tested tonight in ways that they have not been tested already in the competition. The home crowd too will undoubtedly play a factor with the atmosphere at the UCD Bowl for the two games to date being a huge plus for Ireland. It all adds up to what will hopefully be a mouth watering match this evening.

You can hear Mike’s thoughts on the match in full on the link below.