Munster booked their place in next Saturday’s Guinness Pro12 final agains the Scarlets with a convincing 23-3 win over Ospreys at Thomond Park.

It was departing All-Black Francis Saili who stole the show as the New Zealander turned in a man to the match performance scoring the first try and playing instrumental role in Zebo’s superb second half score.

Bigger opened the scoring wth an 8th minute penalty as the Ospreys made a solid start.

Saili’s try came in the 25th minute after some great work from Rory Scannell to keep the ball in play. The quick thinking Saili picked from base of the ruck and barrelled over from close range. 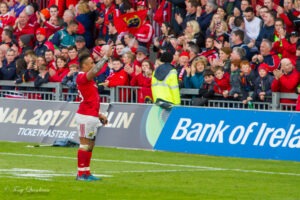 Ospreys captain Alun Wyn Jones made a welcome return but the Welshmen began to visibly wilt after Simon Zebo took his Munster record to 53 tries on the hour mark.

They superb counter attacking try came saw Earls back track to claim an Ospreys kick before offloading to Saili. The New Zealander stepped and jinked his way into open field before Conway took an excellent line to take the pass and lay the ball off to Zebo who crashed dover the line.

Bleyendaal converted and added a penalty with 14 minutes remaining, before Andrew Conway finished superbly in the 74th minute to put the icing on the cake.

The much anticipated battle of the Lions scrum halves Conor Murray and Rhys Webb didn’t happen as Webb cried off with a groin injury before the game.

Ospreys started well and starved Munster of possession but the home side managed to keep the Welsh region at arms length through a combination of steely defence and some handling errors from the Ospreys.

New Zealander Saili was Munster’s liveliest runner and his efforts were rewarded with his opportunist try in the 25th minute which Bleyendaal failed  to convert.

Munster had the edge in the scrum with Dave Kilcoyne doing a lot of damage on the loosehead side. With the clock in the red at the end of the opening 40 Munster were held up over the line.

However penalty advantage was being played and Bleyendaal added the 3 points to give Munster an 8-3 lead at the break.

The Ospreys opened the second period with a snappy break from prop Nicky Smith, Munster hooker Niall Scannell soon returning the favour before Keith Earls was bundled into touch just a few metres out.

Ashley Beck and Dan Evans increased their influence with ball in hand as the Ospreys backs threatened as the hour approached, however the pack was soon pinged for obstruction at a maul.

After a CJ Stander effort was ruled inconclusive by TMO Graham Hughes, Munster somehow turned a Tipuric hack downfield into a scintillating 60th-minute score, Earls and Saili setting up a breathless counter attack that ended with Zebo grounding to the left of the posts.

Bleyendaal’s conversion put 12 points between the sides and his 66th minute penalty was a further blow to the Ospreys whose replacement hooker Scott Otten was unfortunate to have a cracking chip-and-chase try ruled out for a previous knock-on by Tom Habberfield.

Fittingly, the Munstermen closed out the scoring with their third try of the evening, moving the ball wide from their rock-solid scrum to set up winger Conway who showed great feet and finishing skills to make the line. Saili ensured a try shut-out for the hosts, showing great gas to deny Keelan Giles a last-minute consolation score.

Saili’s effort to force Giles onto the touchline was testament to the Munster performance as a whole, even when the game was done and dusted, the home defended their line like it was a 1-point game.

The effort and commitment shown will certainly please Rassie Erasmus who must now prepare his side for a Pro12 final at the Aviva next weekend.

How things have changed from 12 months ago when the men in red stumbled over the line to qualify for this year’s Champions Cup.

Regardless of the result next weekend, this team of players and coaches deserve huge credit for the way then have went about their business since the start of the season and last October’s tragic events.

What a way it would be to end the year by lifting the Pro12 trophy next Saturday evening.