A win of any description will be enough for Munster who will still be licking their wounds from last week’s European defeat by Saracens.

Munster can secure home advantage in the end of season semi-finals as they go in search of the domestic title that has evaded them since 2011.

A Pro12 title would be a huge achievement for this side who are much further along in their development than even the most optimistic of Munster fans would have envisaged at the start of the year.

Treviso could climb as high as ninth with victory over second-placed Munster ahead of their final round showdown with Zebre. Finishing above Zebre will also guarantee a Champions Cup spot for Treviso.

Munster have won their last four matches in the Guinness PRO12 and will take confidence from their 46-3 win over the Italian outfit at the end of November.

Benetton Treviso team news: Head coach Kieran Crowley has made just two changes from the side that downed Edinburgh in Round 20.

David Odiete replaces the injured Luke McLean at full-back and is joined by Angelo Esposito and Luca Sperandio in the back three.

The pack remains the same from their victory last time out with captain Dean Budd leading the way alongside Marco Fuser in the engine room.

Munster team news: Director of rugby Rassie Erasmus has made ten changes for Munster’s return to the Guinness PRO12 and has opted to introduce youth to the side for their clash in Italy.

Six of the British and Irish Cup winning Munster A squad are introduced to the side with Darren O’Shea and Conor Oliver in the starting XV and Kevin O’Byrne, Brian Scott, Rory Burke and Alex Wootton included in the replacements.

Billy Holland captains the side from second row and is the only forward to keep his place in the side. 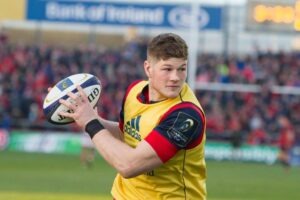 Chatting to Munsterrugby.ie earlier this week, Jack O’Donoghue spoke of the threat Treviso pose having won last their two home matches in the league. The Munster players and management certainly have no intention of taking the Italians lightly.

“They are on a really good run of form and have won their last two home games so it is going to be a big challenge for us,” he said.

“Every time we go over there it is a huge confrontation up front with the forwards so it is going to be a big challenge.

“We only need two points to secure a home semi-final so that is going to be our goal.

“We always want to reward our fans by getting a home semi-final we don’t want them travelling as we always have great support at home – that is our main focus.”

Simon Zebo has been magnificent for Munster this season and a real security blanket for the Irish province under the high ball.

Zebo will relish going toe to toe with Odiete who comes in to replace Luke McLean after he performed well in their victory over Edinburgh.

The aerial battle may well give one side a major advantage in the game and the two full-backs will prove pivotal to their sides’ kick chases.

Key stat: Benetton Treviso have lost all seven games they have played against Irish provinces this season.

Did you know? The Munstermen have won their last 15 games against Italian opponents in all competitions.