Munster looking for first silverware since 2011

It’s Irish-Welsh affair at the Aviva tomorrow as Munster and Scarlets clash in the 2017 Pro12 final. Munster will be looking to bounce back from a nightmare final agains the Glasgow Warriors in 2015 while Scarlets are hoping for their first title since 2004.

Both sides come into the game with confidence high following contrasting semi final victories. Rassie Erasmus has kept faith with the matchday 23 that defeated the Ospreys in the semi final and is hoping that the panel can repeat the performance and result. 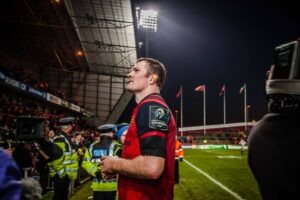 Donnacha Ryan will play his last game for Munster on Saturday

Named in the second row, Donnacha Ryan will win his 167th and final Munster cap, with outside centre Francis Saili and replacement Jean Deysel also set for their final involvement with the province.

Lions lynchpin Conor Murray will make his 100th Munster appearance on Saturday and becomes the tenth player in the current squad to reach the milestone.

“It’s been huge for us. Our forwards have been providing that platform for the whole season, to attack from and to relieve pressure on the team.

“If you get under pressure, sometimes you can’t stop the bleeding and you make mistakes. Sometimes you can’t put your finger on it during those games. Like Leinster, we’ve experienced that. It’s tough sometimes. You probably saw that when we were playing Saracens. From our situation I’m hoping that we’ve learned from that and that we’re stronger for this final.

“I think the Scarlets have got class from nine to 15 and in their reserves. Their attacking ability, we’ve all experienced that over the last couple of months. Any turnover, any counter attack or just any chance they get to attack on the break, they seem extremely hungry to score tries.”

The final promises to be very much a clash of styles with one of most potent attacking forces coming up agains the league’s meanest defence. Munster have conceded a combined 316 points over their 22-match regular season averaging just 14 points per game.

A defence that miserly, doesn’t need to score a while pile but Munster have been productive in the attacking department too.

Outscoring Ospreys by three tries to nil last weekend and once they wrestled control from the Welsh side, the didn’t let it go. Rassie Erasmus will be looking to add to 2003, 2009 and 2011 league titles and draw level with Ospreys and Leinster on four titles each.

Regardless of the result on Saturday, it has been a tremendous season of progress for Munster, finishing top of the table with a record breaking 86 points and looking like a team that has rediscovered its hunger and its killer instinct.

Scarlets boss Wayne Pivac has rewarded the team that secured a superb 27-15 victory at Leinster last week, naming an unchanged side for the PRO12 decider.

Scottish captain John Barclay will remain at the helm in Ken Owens’ injury-enforced absence, while top try-scoring winger Steff Evans had his 37th minute semi-final red card rescinded and is free to continue his rich vein of form.

Scrum half Gareth Davies will mark his 150th appearance for the Welsh region at the Aviva Stadium on Saturday, a fitting way to reach a century-and-a-half of games in the famous Scarlet jersey. 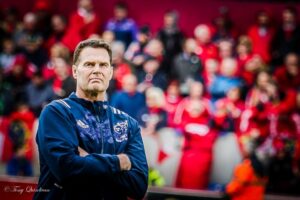 “We learned from the Saracens semi-final how to treat the Ospreys game. It’s all about pressure. I know pressure and understand there are big moments in a game. It’s probably a bit of a cliché, but big moments turn play-off rugby.

“Sometimes you get a lot of belief – or lose a lot. I thought it was a big moment when we couldn’t score in the 22 last week, but then the Ospreys kicked the ball and we actually scored from that one to relieve the pressure on ourselves.

“Against Saracens, we had 10 minutes just before half-time when we were on their try-line and could have scored to turn the pressure around. I don’t think it’s a technical and tactical thing we learned. It’s more a mind thing. We applied it last Saturday and we’ll definitely need it this Saturday.

“Scarlets are hitting form and they had big moments with 14 men (in their semi-final win over Leinster). I think they have the second most runs in the competition and a lot of kicking.

“They changed it from the first few games they played. They’re tactically a well-coached team and you can see they’re on a run of unbelievable results. After they beat us here (in February), they went and got a good smack off Leinster. Then now they go and beat Leinster with 14 men.

“They’ve changed their tactics. But we’ll stick to our guns. We only know one way to play, which has worked for us. I’d be lying if I said to you that even if we lose, it has been a great season. It probably was an okay season. It would be a wonderful season if we won it (the PRO12).” 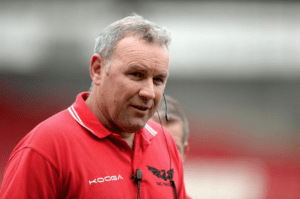 “We know Munster are a very good side. You don’t finish top after the round robin stage for nothing. They’ve got the best defensive record in the Championship and they’re a side that we have a lot of respect for.

“We took some confidence out of that win (at Thomond Park in February) but it’s going to be a different occasion altogether. We have to make sure we go out there and play our game and enjoy the occasion.