Reports today that Munster to keep Taute over Saili

Reports today that Munster are set to retain Jaco Taute with Francis Saili set to depart.

According to Cian Tracey in today’s Irish Independent, Munster will retain the services of Jaco Taute with Francis Saili set to depart the province.

Taute was initially singed on a short term deal back in September from the Stormers as short term cover for the injured Saili and Sam Arnold.

However such was his impact that the three times capped Springbok quickly became a fan favourite and the IRFU approved Munster’s application to extend his deal to the end of the season.

Taute has proved rugged, abrasive and versatile, filling in at both outside centre and full back when required.

His success created somewhat of a dilemma for Rassie Erasmus with Saili out of contract at the end of the season and IRFU limitations on overseas players meaning Munster have a big decision to make. 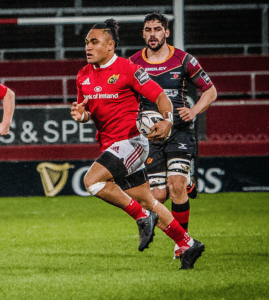 Saili in action against the Dragons

Should Saili leave it’s reported that several English clubs, most prominently Harlequins are interested in acquiring the New Zealander.

Saili joined Munster in 2015 from the Auckland Blues and enjoyed a successful first season. However, his progress was hampered this season by a shoulder injury.

Taute is still contracted to the Stormers but his deal runs out later this year. Munster are said to be confident of making Taute’s time at Thomond Park permanent.

Both players have been immense for Munster this year, it’s just a pity we will only be seeing one of them back in a red jersey next year.