We take a look at Ireland’s pool rivals ahead of the Women’s Rugby World Cup.

As the host nation, there will be plenty of expectation and pressure on Ireland to perform a the upcoming World Cup. That’s easier said that done as they face some really challenging pool opponents.

The tournament kicks off in two weeks and head coach Tom Tierney and his side have set the bar high after a respectable Six Nations campaign. When the draw was made last November, it was evident it was going to be a challenge for Tierney’s squad to get out of a group with Australia, France and Japan.

To make it that bit harder, only the winners of the group will make it to the semi final stage. Ireland will be buoyed by the fact that all three of their pool games are sold out meaning that they will have a vocal home support behind them.

Twelve of the squad that beat the All Blacks in the last World Cup are involved this time around and bring some valuable experience.

So let’s take a closer look at Ireland’s Pool C opponents who they will hope to overcome to gain another semi final spot. 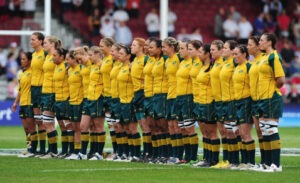 Ireland’s first game could probably be the toughest of the three. Australia are known for their physicality, which head coach Tom Tierney has eluded to in recent times discussing their powerful ball carriers.

On top of that, Australia head coach Paul Verell will be using many players with valuable sevens experience which will give the Aussies a dangerous mix of power and versatility.

However Australia were on the wrong side of some heavy defeats recently including a 53-10 loss to England in June as well as a 45-5 loss to New Zealand.

Ireland can take confidence from these heavy defeats as it indicates Verrel, however confident he is, could be wrong and under appreciating Ireland going into the tournament. 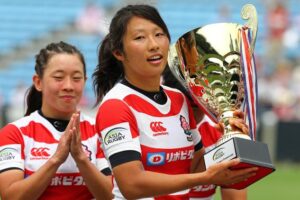 In June, Japan travelled to Ireland to play two warm up games in which the Irish came out on top on both occasions with scoreline’s of 24-22 and 24-15.

Japan did however cause Ireland some problems with winger Honoka Tsutsumi and no. 8 Mateitoga Bogidraumainadave impressing. The Japanese maul also created problems for Ireland in the two victories.

Japan went on to defeat Wales comprehensively after the games against Ireland as well as beating Hong Kong to win this month’s Asia Cup.

The Japanese are not to be taken lightly in this tournament even after two victories over them in June and with head coach Goshi Arimizu not finalising his squad until July 30th, they could still cause problems for France, Australia or Ireland.

This will be Japan’s first World Cup since 2002, one where they defeated Ireland 18-0 in the 13th place playoff. 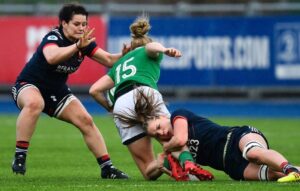 The French come into this pool as the highest ranked team in the world rankings in 4th compared to Ireland in 5th and Australia in 6th.

When the sides last met in the Six Nation Tierney’s Women came out on top on a scoreline of 13-10 in Donnybrook which was made all the more impressive since the Irish were missing Sene Naoupu, Alison Miller and Hannah Tyrell along with the injured Niamh Briggs.

France lost two players to the bin in the tight encounter back in the Spring but will feel they have as much of a chance of reaching the semi finals as the other three teams in the group.

They finished third when they hosted the tournament in 2014 and there’s some confident noises coming from the French camp. They know Ireland well and won’t fear them either.