Rory Scannell ready for whatever lies ahead

Scannell came on to replace the injured Tyler Bleyendaal after he suffered a head injury and had to go off for a assessment by the medical team just seven minutes into Saturday night’s Guinness PRO12 clash with Glasgow at Irish Independent Park.

Scannell hit a second half penalty that helped his team to a 10-7 win over their Scottish opponents. This win will help keep Munster on course for a home semi-final.

“My introduction was unexpected, it was early doors when I came on and we looked in control. Then they scored late on, we had had a few mistakes in attack and in the end we had to produce a huge defensive performance to hold out. But credit to our guys and especially the younger guys like Conor Oliver, these guys really stood up in our defensive performance.” 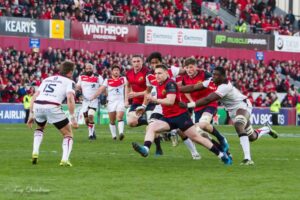 Rory Scannell in action against Toulouse

Both Rory’s brothers were also playing games on the same day, Niall as Munster hooker while younger brother Billy was representing the Irish Under-18 schools team in Cardiff.

As Munster stay on with the hope of winning two trophies this season through the Champions Cup and the PRO 12, having a good bench is just as important for the Munster men to achieve this.

“It’s great to have depth in our squad. We had a very strong bench tonight and a few lads were given a go and they really stood up. Conor (Oliver) had a fantastic performance, Jean Deysel came in for his first game and he was outstanding.”

“Glasgow are a class team and they have pretty much the whole Scottish team there; we knew it was going to be a tough ask because we had seen that in the three games previous, so I think we have to take great pride in our performance.

“It’s not going to get any easier in the run-in of three games. We have Ulster next week who are fighting for top four as well, so that’s going to be a very tough game and we’re really only looking at that at the moment. But it’s good to be in the semi of Europe the following week and in the hunt for the two trophies, three in fact when you count in the B&I Cup.”

It remains to see if Keatley or Scannell will get the nod at outhalf for the Ulster game with Bleyendaal most likely being rested for Saracens. Either way, Scannell is more than ready and able to step up to the mark.