Reports from South Africa claim Erasmus has triggered the release clause in his Munster contract and will return to Boks.

In an article published in South African weekly Rapport, it states that Erasmus notified Munster of his intention to leave two months ago, meaning he will have left the province in four months time and also claims that Erasmus could be in place for the Springboks’ first Rugby Championship game in August.

Due to his strong ties with Munster and the success he has achieved at the province over the past 12 months, Munster is likely to release him as soon as Erasmus has found a suitable substitute for his position. He will then have the opportunity to explain his decision to the Munster players. 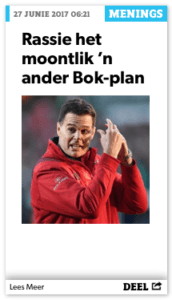 His new job will not be as the South African head coach but as Director of Rugby with current coach Allister Coetzee reporting up the chain. Coetzee has been under fire since taking the post with many believing that Erasmus should have gotten the nod ahead of him.

Any plans Munster might have had to slot defence coach Jacques Nienaber into the DOR role have also been scuppered with Erasmus likely to take him as part of his coaching setup with the Boks. is expected to return to South Africa also.

Erasmus with the SARU as a technical adviser with the World Cup squads of 2007 and 2011 before progressing to the role of General Manager of High Performance in 2012.

He was the tipped to succeed Heyneke Meyer in 2015 but ultimately didn’t get the job.

The timing for Munster fans couldn’t be worse. The team made huge progress on the field with players buying into the South African’s methods and philosophy. Considering all the turmoil and tragedy that enveloped the province last season, what the need most is stability, is a head that wants to be at the province and nowhere else.

Rassie's mandate: Get Boks on same level as NZ https://t.co/gZlkqqoahy

It is looking increasingly likely that Erasmus will not be that person. If that is to be the case, then the sooner the search for a long term replacement begins the better for all involved.