Stuart Barnes not in favour of Warburton captaincy

Stuart Barnes not in favour of handing captaincy to Warburton.

According to the former England out half and current Sky pundit, the only game plan capable of overturning the All-Blacks is to deny them possession and limit the amount of defensive work you have to go through.

In his Times column, Barnes identifies his preferred back row combination of Stander/Faletau, Tipuric and Vunipola.

“Warburton is a fine player. A good man. These are not the issues. It is the nature of his game,” wrote Barnes.

“He will defend until the last man drops in New Zealand. But more will be needed against the best team in the world. And Warburton doesn’t possess that extra ingredient.

“The Lions will not beat a team as good as New Zealand by making a thousand tackles. The higher the tackling stats, the greater the margin of defeat.”

The Englishman’s selection would be good news for Munster’s CJ Stander who’s selection is still in the balance.

The Times rugby columnist also refers to the move in the 3rd test in 2013 to replace Warburton with Sean O’Brien, describing it as a move from ‘defensive heroism to match-winning attack’

“With a new openside flanker in the ball-carrying Sean O’Brien, the Lions were dominant. Their injured skipper wasn’t missed. Playing far more on the front foot, the need for tackling and turning over the opposition was negated,” wrote Barnes. 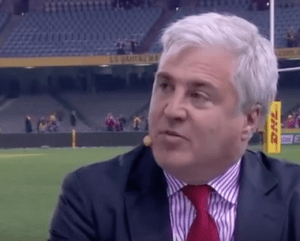 Barnes is not convinced of Warburton as a ball carrier

There is no doubting Warburton’s ability to compete at the breakdown. The Welshman’s speciality is an innate skill to slow down opposition ball by playing right on the edge of the breakdown laws.

Despite these specialist skills, Barnes does not rate the Cardiff Blues player as a ball carrier.

“Warburton is not a natural with the ball in hand, not a comfortable ball carrier,” says Barnes.

“The more the Tests play to the significant strengths of the Cardiff Blues man’s game, the more it is likely to guarantee victory for New Zealand.”

While defence is obviously a critical part of any game plan, Gatland knows his time simply cannot just sit back and absorb wave after wave of attack. It is not strategy to win a test let alone a series in the land of the long white cloud.

Perhaps an alternative to Warburton would lend more to that strategy but we will have to wait and see. If Warburton doesn’t recover from his current injury the choice will be out of Gatland’s hands.

Should the former Wales captain not recover from a current knee injury, then the decision may already be made for Gatland.