Saturday’s third and final test match marked the end of a brilliant summer of rugby for Munster players.

O’Mahony earned his first cap as a Lion in the loss against the Auckland Blues. However the highlight of he tour would be leading the Lions out as captain in the first test. Unfortunately for O’Mahony that ill-fated first test would be his last involvement in the tour.

Conor Murray started all three tests and was a key factor in the series draw. His passing was precise and accurate and his box kicking was superb. Time and time again the Garryowen man was able to effect exit plays with clearing box kicks which took pressure off Farrell and Sexton. His vital try in the second test victory sets Murray apart as the first Northern Hemisphere player to score four test tries against The All blacks.

C.J Stander has only improved since making his debut for Ireland in February of 2016. In his first game for the Lions he scored against the Blues and then impressed enough in the following weeks to make his way into the match day 23 for the final two test’s, coming on in the final test making a notable impact with both his carries and his defence. 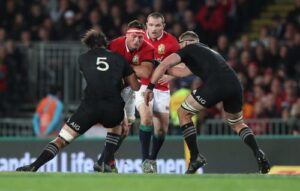 Apart from the Lions, Munster had huge representation with the Irish team that travelled to America and Japan. Niall and Rory Scannell became the first pair of Munster brothers to play alongside each other in a test match in the professional era when they  took to the field in new Jersey in the win over the U.S.A.

Munsters impressive tighthead prop, John Ryan made his first test start against the U.S.A whilst Rory Scannell and Andrew Conway made theirs a week later against the Japanese.

Keith Earls has a super tour scoring four tries, with braces against the U.S and Japan. This set a new Irish record for most tries scored in a season with nine to his name.