Limerick stormed into the Munster U21 final last night, overwhelming a Clare side that were never allowed into the game. Led by several members of John Kiely’s senior squad, Limerick controlled the game from start to finish and will now patiently await the winner of tonight’s other semi final clash between Waterford and Cork.

In the meantime, let’s reflect on the key points to arise from the 13 point win for Pat Donnelly’s side.

Colin Ryan and Robbie Hanley ran the game last night for Limerick. Simply put, they were everywhere. Hanley’s endless energy allows him to track players in defence and also run at the heart of opposition defences when attacking. 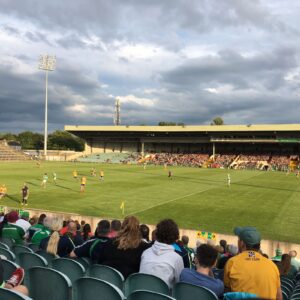 Ryan on the other hand is more precise in his play cleverly distributing the ball into the inside forwards whilst chipping in with a couple of scores a game. However, either one of the pair is equally adept at filling in for the other. Last night Hanley contributed two beautiful points from play whilst Ryan won a world of posession around the park.

They two are very similar to the pairing of Darragh O’Donovan and Pat Ryan who were instrumental in Limerick’s 2015 All Ireland win. The link from Kyle Hayes at centre back through the midfield duo to Cian Lynch in the half forward line provides Limerick with an extremely strong and clever presence through the middle.

Another noticeable pattern that emerged from the Limerick front 6 last night was their immense ability to win their own ball. Whilst the majority of the time the ball delivered from defence was crisp and accurate, anytime it wasn’t, Lynch, Murphy, Gillane, Casey, Morrissey and Nash were able to get to battle for the dirty ball and head for goal.

None of the forwards are exceptionally tall yet almost all dominated in the air. Gillane and Lynch in particular fielded a number of balls that they simply had no right to. Against Cork or Waterford if the forwards can continue to win the ‘dirty ball’, it will go a long way in deciding the outcome of the final.

In addition to this, when introduced, substitutes Conor Boylan and Paudie Ahern continued this trend as Ahern tacked on a point with Boylan winning a number of puck outs at half forward, something that bodes very well for Limerick going forward. 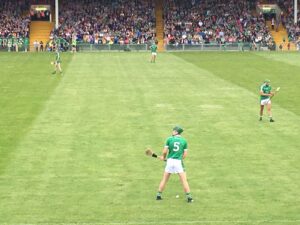 After the Tipperary game, there were still questions over the Limerick full back line which was relatively inexperienced and had not been tested by the Premier county. Those questions were answered emphatically last night. Sean Finn continued his excellent form whilst Darragh Fanning coped admirably with the dangerous Aaron Shanagher limiting him to a solitary point.

However, Dan Joy was the standout defensive performer, improving massively on the Tipperary performance. While he did nothing wrong against Tipp, he was exceptional last night as his speed allowed him to get to every breaking ball first and close down his man. He will be happy with his distribution as well as he launched a number of attacks.

Thomas Grimes was the only substitute from the quarter final and he repaid his manager’s faith putting in a terrific shift, opening the scoring within the first minute. Beside him it was business as usual for Kyle Hayes who was terrific at centre back once again. Ronan Lynch will be pleased with his contribution from open play but will look to amend the number of frees missed from distance.

All in all, every Limerick defender would argue that they won their individual battles.

Aaron Gillane was simply unstoppable. 0-13 with 8 of those coming from play is an extraordinary feat for the Mary I student and it could have been more had he opted to shoot for goal at different stages. However, another feature of his game and his teammates was their unselfishness in front of goal.

The players trust their forwards to win the ball when delivered and this in turn translates into easier scores for the Treaty men. A fact borne out by 21 of their 28 points coming from play and nearly all coming from inside the opposition 45′.

One thing Limerick will need to improve on is their ruthlessness in front of goal. Last night Peter Casey spurned a goal chance inside the opening minutes which he knows he should have converted. Casey was not the only one to miss in front of goal as Nash, Morrissey and Gillane were all guilty of failing to convert in front of the net.

Casey was the one to actually score the goal, notching a cracker from the 21′ after his man had attempted to rugby tackle him to the floor. Gillane was unlucky not to have netted after hitting the post from a rasper from 30 yards out. With Clare always at arms length, Limerick were content to take points.

The fact that Limerick created a number of goalscoring chances will be pleasing to Pat Donnelly, but in the final, they will need to be more efficient with their goal chances if they are to earn a second Munster U21 title in three years.

Bigger tests yet to come

Limerick will have known from the start of the Championship that their two biggest rivals would not be playing until the semi finals. Limerick were expected to overcome Tipp and Clare which they did with aplomb, but whoever they face in the final will be a massive step up.

Cork can call on seven of Kieran Kingston’s Munster final matchday squad with four playing an integral part in the victory.  Mark Coleman, Shane Kingston, Darragh Fitzgibbon and Luke Meade have all taken to senior hurling with ease and it will take a lot to beat them. Meade is ruled out of the semi final with a broken thumb suffered against Clare.

For Waterford, three of the Deise team to beat Kilkenny in the qualifiers have been included in Conor Gleeson, Shane Bennett and Patrick Curran. Waterford are defending Munster and All Ireland Champions and should not be overlooked in this clash.

Whatever the outcome, Limerick know they will have to be at their best in the Gaelic Grounds on July 26.