Uneasy start for Lions as Sexton does little to impress in poor opener.

The battle for the number ten test shirt took a swing towards Owen Farrell today as Johnny Sexton struggled in what was an overall poor performance by Warren Gatland’s side.

While Sexton was certainly not the only Lion to underperform as the Lions failed to put away a team made up of Super Rugby fringe players, club stalwarts and semi-professionals in front of an enthusiastic sell-out in the northern town of Whangarei.

Sexton was uncharacteristically off key from the start and was replaced by Owen Farrell after just 48 minutes. Farrell looked far more assured than the Irish outhalf and helm and helped to guide the Lions to a faltering win.

Gatland and Co will little time to dwell on the manner of the victory with the Blues next up on Wednesday morning. In fact their next five games come against in some serious Super Rugby outfits as well as the Maori.

While there were no stand out performers, Ross Moriarty, Taulupe Faletau, Kyle Sinckler and Ben Te’o certainly did their test aspirations no harm.

The home side were a tough nut to crack throughout the game and seemed to play the wet conditions perfectly. Bryn Gatland, son of the Lions coach, was the Barbarians key operator keeping the Lions on the back foot with some intelligent kicking.

Sexton pulled a 40 metre penalty wide after the hosts were pinged for an offside infringement. Moments later the Lions created a fine chance when Sexton released  Tommy Seymour, before Te’o made a useful break. It would amount to nothing as Hogg knocked on. 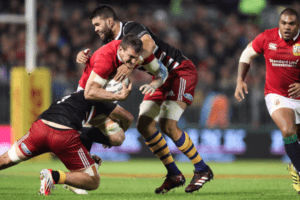 The home side almost hit back immediately when the Lions were sloppy from the kick off. Finau picked up a bouncing ball and opened the Lions defence before offloading to Luteru Laulala.

Laulala should really have finished but instead managed to butcher a 3 on 1 and allow Faletau to catch him, turn him and hold him up over the line. It was a superb cover tackle by the Welshman.

It was just a stay of execution as minute later Sexton skewed a clearance kick and from the lineout Gatland put an up-and-under into the Lions’ ’22 causing havoc.

Having regained possession 5 metres out, captain Sam Anderson-Heather powered through Henderson and over from close range for the opening try.

Gatland converted to make it 7-3 to the barbarians.

Hogg who was having a torrid evening, then butchered a certain try with a poor pass to Watson who was certain to score, had the ball been put in front of him.

He was then held up over the line by Vaka after the impressive Ross Moriarty made a big carry. Sexton’s fine pass put Te’o into space but the Scotland full-back couldn’t apply the finish.

Warburton turned down a penalty under the posts to go for the scrum. In what summed up the Lions performance, the set piece was ineffective. The ball was moved wide and the move came to nothing.

Infrequent attacking promise was undone by unforced errors but Faletau was the stand out performer.

A final chance presented itself before the break with Warburton shunning a kickable penalty, opting for a scrum that once again came up short. The home side took a deserved 7-3 lead into the break.

Minutes into the second half Greig Laidlaw kicked a penalty while Sexton was receiving treatment for a knock. Sexton was withdrawn before the 50 minute mark

After 52 minutes of fruitless and inaccurate endeavour, the Lions finally got the first try of the tour. Moriarty punched a hole in the Barbarians’ defensive line and the backline managed to find Anthony Watson who finished in the corner.

The Barbarians regrouped and looked to hit back immediately and but for a fine tackle from Tommy Seymour, they might just have done so.

Farrell had the chance to make it a two score game but his penalty attempt hit the post and instead it made for an anxious last ten minutes.

With the gap just a 6 points, the locals made one last push and when Alun-Wyn Jones conceded a penalty, the Barbarians kicked to the corner.

Although winning possession from the lineout, Mako Vunipola stole the ball from the maul and the Lions managed to close out the game.

A win is a win but Steve Hanson and his All Black squad will not exactly be quaking in their boots watching the first 80 minutes of this years Lions.

Come to think of it, neither will the Maori or Super 15 sides. An awful lot of improvement is needed.