Warren Gatland has named his first British and Irish Lions starting XV of the 2017 tour of New Zealand.

With a selection that appears to strike a balance between presumed test starters and midweek players, Gatland has named a strong XV to take on the Provincial Barbarians on Saturday.

No Munster players in the opening games team but not to worry as there are plenty of games before the first test against New Zealand.

The side features Ireland captain Rory Best, his ulster team mate Iain Henderson, and Leinster’s Johnny Sexton. Tadhg Furlong is on the bench. 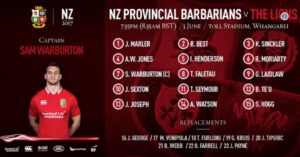