The Irish Women’s sevens side secured the country’s highest ever finish in the HSBC World Rugby Women’s Sevens Series over the weekend. They secured ninth spot, up three places and with an additional 23 series posts from last year.

Having already secured their place as a main team in next year’s series, following exploits in Langford, Canada, earlier this month, the Irish were looking to secure their place in the upcoming Sevens World Cup next year, and are still in with a strong chance when they go to Kazan, Russia, in two weeks time. 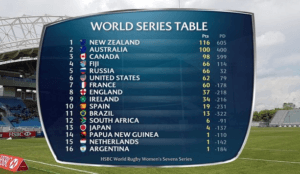 Debutantes Anna McGann, Claire Boles and Niamh Byrne all saw gamete as they claimed eighth place in the final leg of the series in Clermont-Ferrand France.

The 22 year old has emerged as one of the best finishers on the series. In all, she has scored 31 tries in 54 series appearances for her country a superb strike rate of 1.74 tries per game.

If Ireland are to get over the line for the World Cup which will be held in 2018 in San Francisco, they will join Spain, France, and Russia, who have already qualified from the European section.

Check out these highlights videos from day one and two of the tournament.