World Rugby’s residency rules are set for a major overhaul.

The residency rule in Rugby Union is set to be changed, meaning the minimum length of time needed to spend playing in a country not of their birth to qualify to play international rugby with that country is to go up from three years to five according to the WRU.

In October of last year, the World Rugby Union launched a review of the existing rule following strong criticism from many countries, and it is widely reported that, while they are in Japan, a World Rugby council meeting will confirm the extension of the rule.

Many people have agreed with the rule such as the WRU CEO Ian Ritchie. He said:

‘The increase from three to five years on the residency qualification is right and is a good thing and that is generally now being supported’.

‘It is a matter for World Rugby but it will go to the council meeting in May and there is a very good chance of it being adopted’.

‘There is every chance of the general principle being in for next season if it is voted on. There will be every emphasis on adopting it sooner rather than later’.

The latter part of that statement would mean that the uncapped players who sign for clubs ahead of next season will be subject to the five-year rule. 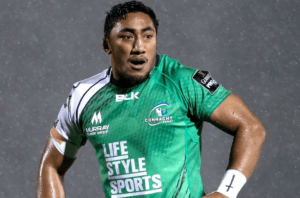 Bundee Aki would still qualify under the old 3-year rule

For example, Ireland would have to wait five years for Leinster’s new winger James Lowe to qualify for Ireland, whereas the likes of Bundee Aki, Tyler Bleyendaal, and Jamison Gibson-Park would all qualify for Ireland under the three-year agreement.

This is because they have lived in the country before this rule was put in place. Aki will be eligible in October, while Munster’s Bleyendaal in January 2018.

Ireland have benefitted from the three-year rule, with top plays such as Munster’s CJ Stander. New Zealand have been accused of over exploiting it, by plundering the top talents from neighbouring Pacific Islands.