Conor Murray in race to be fit for Lions Tour

Munster face Connacht this Saturday in their final regular season game of the Pro 12 with a home semi-final secured. The following week they will face either Ospreys or The Scarlets, depending on results this weekend in the semi-final at Thomond Park. Should they come away with a win here they will set up a potential Pro 12 final with Munster. 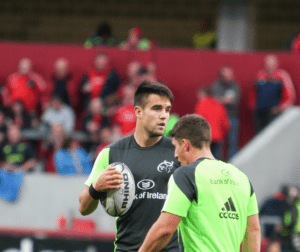 For 41 men (barring injury), June 3 will see the beginning of the 2017 Lions tour of New Zealand against the New Zealand Provincial Barbarians. Conor Murray is one of the Lions standout players. A man with knowledge of how the beat the All Blacks, inspiring Ireland in Chicago last November.

Yet speaking in UL yesterday, Rassie Erasmus has confirmed that Murray’s injury is clearing much more slowly than first expected. When asked about his Lions hopes, Erasmus said,

“There’s some hope, I think there’s definitely improvement. While the last few weeks I said it was slow, it is definitely still slower than we hoped it would be”

“He’ll again be touch and go for this week. I can’t tell you, I haven’t actually seen him this morning. But last week he wasn’t ready to go. So we’ll see how he goes today (Monday) in training.

Erasmus has confirmed that Murray has been training recently with the province but the extent of the training is unclear. Murray has not played since injuring his shoulder and arm against Wales in mid-March against Wales.

“Every week he contributes more in training sessions and he is doing more and more and more. And he has been ticking all the boxes, much slower than we hoped to, but he is ticking the boxes.

Hopefully, for Munster’s sake and the Lions, and for the man himself, Murray will be fit in time for the first test on June 24 at the latest.