The Gaynor Cup is to take place in the University of Limerick from this Thursday, June 22 until Sunday, June 25. The Fota Island Resort FAI Gaynor Cup will see girls from all around the country represent their team and club at Under 14 and U16 level.

This competition down through the years has been hugely influential in the development of female footballers in Ireland with many of the current Republic of Ireland Women’s teams made up of past players in the competition.

“Having tripled its numbers in recent years with almost 1,000 girls expected to be involved this year, the Gaynor Cup remains one of the best tournaments to aid the development of female footballers in this country.

“A lot of credit must go to Niamh O’Donoghue, Sue Ronan, Dave Connell, members of the WFAI and the many volunteers who have helped the tournament to grow from strength to strength. And the FAI are delighted to play a bigger role this year in its organisation and running.

“When you have a competition that produces the likes of Stephanie Roche and Katie McCabe, established Republic of Ireland senior internationals, then you know it is something special. The Gaynor Cup plays a big role in the development of women’s football, which is incredibly important to the Association and is one of the nine pillars in our Strategic Plan for 2020.

“The addition of Fota Island Resort as a sponsor is terrific because it allows the tournament to grow even more and further strengthen its reputation. We are delighted to have Fota Island Resort onboard and look forward to kickstarting the partnership.”

Take a look at the launch video of the Gaynor Cup which is kicking off tomorrow #LikeAGirl @FAIreland pic.twitter.com/qvauaZqtn2

Director of Marketing at The Fota Collection Seamus Leahy, said: “We’re proud to announce our sponsorship of the Fota Island Resort Gaynor Cup. We look forward to working with the FAI to help support these fantastic young athletes and to play a role in helping bring women’s football to the top of the Irish sporting agenda.

“With participation in women’s football growing by the day, it was a natural choice for Fota Island Resort to support this important tournament. Although we’re first and foremost sponsoring the Gaynor Cup, we see this as a proactive partnership with women’s football as a whole and will continue to look for ways to support and encourage girls and women to get involved in football.” 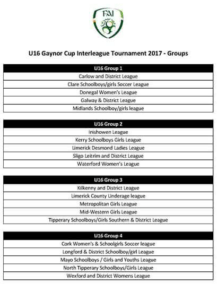 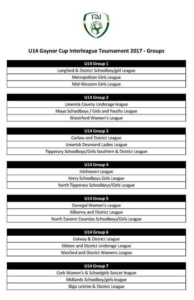 The Limerick District League Premier Division kicked off on Thursday night with plenty of goals scored and no ...
Read More →

Adrian and Noel delve into another week of action for Treaty United in the latest episode The latest ...
Read More →

This is the second part of our preview ahead of the Limerick District League Premier Division kick-off tomorrow ...
Read More →

After a wait of two and a half months since the Lawson Cup final between victors Pike Rovers ...
Read More →

The Irish international had spent the last four years plying her trade in the Frauen-Bundesliga in Germany. Celtic ...
Read More →