The crowd had no time to settle in the Markets Field before the opening goal was scored. Former Limerick FC player and current Janesboro captain Shane Clarke won a physical dual with 17-year old centre-back Tomas O’Connor before slotting the ball past Tommy Holland. Limerick responded with a shot from Sean McSweeney which was easily held by John Mulready.

The District League champions almost doubled their lead as John Connery crossed to the back post but Shane Clarke guided his header wide.

Immediately, Shane O’Hanlon’s side were made to pay as Ian Turner cut inside Junior international Danny O’Neill before unleashing a shot which evaded the grasp of John Mulready via a deflection. Janesboro almost regained the lead as the lively John Connery forced a super save from Tommy Holland in the Limerick goal.

Shortly afterwards, the Airtricity League club took the lead. Sean McSweeney released Garbhan Coughlan in behind the back four and the former Regional man skipped past John Mulready before squaring for Chris Mulhall to finish from close range. 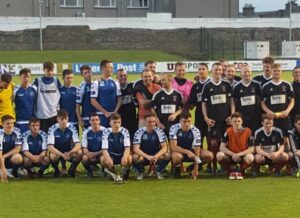 Both teams served up entertaining game

Janesboro began the second period with a real purpose and drew level after a byline cross by John Connery allowed Ben Quirke to capitalise on some slack Limerick defending to tap in at the back post. Limerick quickly regained the lead when Chris Mulhall converted a penalty kick which was awarded after goalkeeper Stephen McNamara fouled the scorer.

Limerick doubled their lead as Clyde O’Connell punished Janesboro’s inability to clear a Stephen Kenny corner by smashing the ball into the roof of the net. Limerick winger Liam McCartan was instrumental in the creation of the Shannonsiders fifth goal. McCartan beat three players before seeing his shot saved by McNamara.

With the final whistle approaching, Foley scored his second of the game as he burst passed the challenge of Lee O’Mara before placing his shot past the helpless Stephen McNamara.

Both teams provided a goalfest on an enjoyable evening for all those in attendance.