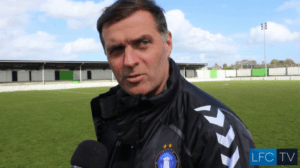 It has been a tumultuous week for the Shannonsiders following the departure of Martin Russell as manger. Coming into this tie, both sides will be desperately looking to win this game to rise from the bottom half of the table.

It is the first game in charge for interim manager Willie Boland this evening. Boland has been head of the academy at Limerick FC and will be assisted by Joe Gamble and long term goalkeeping coach Eddie Hickey.

Boland insisted that it wasn’t difficult to focus the players during the week ahead of the St. Pats game. Speaking to the club’s official website, he stated;

“As a player, even when a manager has left, you have your own professional pride. They understand how football works and it can be quite volatile.”

Boland believes that the current squad need to cut out silly mistakes in defence and feels it is his job to provide them with “more belief and the platform to do what they are doing. We’ve conceded goals in areas where we have made mistakes, if we can cut out those mistakes the lads have a good platform.”

Captain Shane Duggan also spoke to the club ahead of the game. He was ‘sad’ to see Martin Russell go but believes that the transition may be quick under Boland.

It’s always sad to see a manager go but with Willie coming in now; he has vast experience around the place and has played at the top level.”

Duggan admitted that the players were hurting after last week’s defeat to Cork and are looking to make amends in Inchicore.

Limerick have no fresh injury concerns ahead of the game outside of long term absentee Shane Tracey.

St. Patricks Athletic come into the game off the back of a superb win over Bohemians in the Dublin derby at Dalymount Park last Friday night.

After early season struggles, Liam Buckley’s men have picked up two vital wins against two Dublin rivals including Shamrock Rovers. Pats’ lie one place behind Limerick but are level on points with one game extra played.

If Limerick are to get anything from the game, the defensive effort is going to have to improve. The concession of cheap goals against Cork City had Limerick in trouble early and they never really recovered.

A good start with a solid defensive performance on the road is a must if Limerick are to come back from Dublin with anything to show for their efforts.