Donnybrook is the venue for this year’s league decider in what promises to be a thriller between table toppers UL Bohs and 2016 Champions Old Belvedere.

Bohs have been exceptional this season with a 13-1 record from their 14 league games.

“What we’ve been doing has worked well for us this year so we just clarified a few things around what we wanted to do”.

At Christmas both Bohs and Belvedere were tied on points with 32 each but Bohs went on a powerful run that saw them pull away from the chasing pack and cement top spot sixteen points clear of second placed Railway Union.

“When we started the season, our goal was a home semi final and at Christmas we were on track so we are happy with that”.

Indeed Bohs only loss was a smash and grab raid Railway in the penultimate game of the regular season.

On that occasion Nikki Caughey and Edel Murphy swapped penalties before Murphy landed a second before the break to give Bohs a 6-3 lead at the half.

Bohs laid siege to the Railway line for the remainder of the half with Niamh Kavanagh coming close but for a heroic tackle from full-back Clare Ryan.

It’s a defeat that Storey says his team learned a lot from.

“We had to make sure we kept our feet on the ground and there is nothing  better to do that than to lose a match”.

“I suppose you learn a lot more from your defeats too so we’ve had a chance to have a look at ourselves and tidy up a few things”.

The Annacotty side will have confidence from both league games with Belvedere this season. Bohs won the Limerick leg 23-12 and had a 29-14 win up in Dublin.

Despite both victories, Bohs will take nothing for granted heading into tomorrow’s final.

Complacency will be their biggest enemy, something that head coach Mike Storey will be doing his best to avoid.

Belvedere have a really strong squad, we were in the final with them last year and there was only two points difference.

“Whatever has happened leading up to now doesn’t matter, it’s all on the day”.

“They’ve won three league finals in a row so they’ve been there and done that. In my time we’ve been to one and lost it so until we win one, we can’t really say we are favourites”. 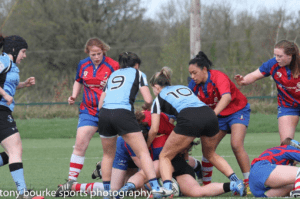 Action from the semi final victory over Galwegians

If the robins maintain the level of performance they showed throughout the regular season, then they will return to Annacotty as All Ireland champions.

After all UL Bohs has set itself up as one of the elite women’s programs in the country producing no less than 33 Irish internationals, 5 international captains and 1 international referee in the form of Joy Neville.

Let’s hope that the can break Belvedere’s stranglehold on the competitions and return home champions.

Best of luck to Mike and all the panel from every one at Sporting Limerick.

The game will Kick-off on Saturday at Donnybrook in Dublin at 6pm.