It’s 2nd hosting 6th in Round 19 of the PRO12 as Glasgow Warriors make the trip to Irish Independent Park to take on a Munster team in a rich vein of form. 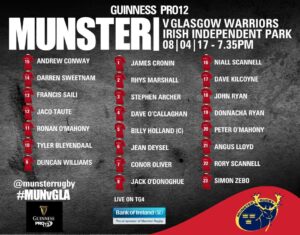 Peter O’Mahony is on the bench after he overcame a thigh complaint – but Ireland trio CJ Stander, Keith Earls and Conor Murray are unavailable.

Meanwhile the Warriors are targeting a big performance to bounce back from a European Champions Cup defeat to Saracens at Allianz Park last week.

There is so much at steak for Munster over the next three weeks with home games to Warriors and Ulster which can potentially seal a home semi final before the Champions Cup semi final against Saracens.

Glasgow, with only four games left, still harbour hopes of reaching the semi-final but are ten points adrift of fourth placed Ulster and seven behind fifth-placed Scarlets.

It seems an uphill struggle for the Scottish side but they would like nothing more than to spoil Munster’s party seeing as Munster have been Glasgow’s bogey side this season winning all three fixtures to date.

Director of Rugby Rassie Erasmus has made ten changes for the clash against Glasgow – a side that have won their last two Guinness PRO12 matches. 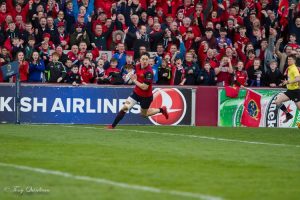 Darren Sweetnam is named on the wing

Leading the Guinness PRO12 points scorer Tyler Bleyendaal, continues at half-back alongside Duncan Williams. Francis Saili returns to take up a centre role in partnership with Jaco Taute for the first time.

Jean Deysel will make his first Munster appearance wearing six, and is joined in the back row by No.8 Jack O’Donoghue and impressive academy graduate Conor Oliver.

Rhys Marshall, Stephen Archer and James Cronin make up the front row – Cronin making his 80th appearance for the province.

As for Glasgow, head coach Gregor Townsend has made three changes to the side after their European Champions Cup quarter-final defeat by Saracens.

Ali Price comes in at scrum-half, Sila Puafisi at tight-head and Nick Grigg takes over at centre.

Puafisi is joined in the front row by Fraser Brown and Gordon Reid, with captain Jonny Gray and Brian Alainu’uese packing down behind them.

Rob Harley goes at six, Ryan Wilson at openside, and Adam Ashe completes the back row.

Finn Russell and Alex Dunbar continue at ten and 12 respectively, while Stuart Hogg starts at full-back with Tommy Seymour and Lee Jones occupying the wings.

“We have had some great battles with Munster already this season and we are expecting the same on Saturday evening,” he said.

“They bring physicality and intensity on the same level as a Test match and we are going to have to perform very well in those aspects of the game to get a positive result.

“We didn’t get things right last weekend against Saracens but things move on pretty quickly in sport and we now have an opportunity to show a true reflection of the rugby we are capable of playing. We are determined to deliver a much better performance over in Cork.”

Ahead of the clash Munster director of rugby Rassie Erasmus said:

“We must remember where we came from last year. We’re growing as a team but we’re not all of a sudden a bulletproof team who can beat everybody.

“Now we’ve got Saracens in two weeks’ time and in-between that, two heavy Guinness PRO12 games (Glasgow and Ulster) to contend with.” 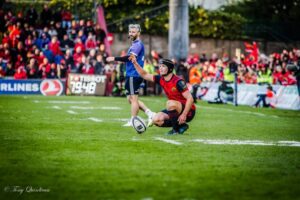 Tyler Bleyendaal lines up a kick

Last week the ever-dependable Bleyendaal helped himself to 21 points in the European Champions Cup demolition of Toulouse at Thomond Park.

Meanwhile, Russell will have been frustrated with the Warriors’ stuttering attack against a hugely-powerful Saracens side.

The Scotland international will be hoping for a big game to secure a British & Irish Lions tour spot in the competitive fly-half position.

Key Stat: The two sides have met three times this season in all tournaments, with Munster victorious on each occasion. Glasgow’s only previous victory in Cork was 21-18 in May 2008.

Lions Contenders: Munster will look to introduce a host of Lions contenders from the bench on Saturday – Niall Scannell, Donnacha Ryan, Peter O’Mahony and Simon Zebo will all hope for game time to make an impression ahead of Warren Gatland’s squad announcement on the 19th April.

Stuart Hogg looks a dead cert for the Lions this summer but the Warriors are also packed full of Lions contenders – Fraser Brown, Alex Dunbar, Tommy Seymour, Finn Russell and Gordon Reid all hope to advance their claims.

Jonny Gray captains the side as he looks to nail down one of the second-row berths for the Tour.

Munster have lost just twice in Cork since early 2013 – to Ospreys in February 2016 and to the Blues in September.