Limerick make it two wins from two under Willie Boland

Limerick FC produced an utterly dominant display at the Markets Field as they defeated Drogheda United 3-0 courtesy of goals from Rodrigo Tosi, Chris Mulhall and Chiedozie Ogbene. The Shannonsiders move up to fourth place as a result.

Limerick began the game at a ferocious pace and took the lead after just five minutes, as Rodrigo Tosi powerfully headed home from a Lee-J Lynch corner. Drogheda barely had time to recover before they were 2-0 down. Chiedozie Ogbene’s weak shot rebounded off Chris Mulhall and past Stephen McGuiness. 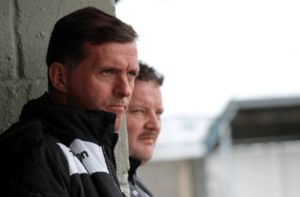 The home side’s early dominance continued as a great overlapping run by right-back Shaun Kelly resulted in a low cross which Rodrigo Tosi failed to convert under pressure. Limerick were almost gifted a third goal as a mix up between Drogheda goalkeeper Stephen McGuiness and center-back Kevin Farragher allowed Tosi to take possession. However, McGuiness recovered just in time to deny the Brazilian front man.

Shaun Kelly was a constant threat all evening and his overlapping runs caused the Drogheda defenders all sorts of problems. Chiedozie Ogbene’s neat turn on the edge of the box deceived the Drogheda defence but his shot was blocked on the line by Kevin Farragher.

Within ten minutes of the restart, Limerick extended their lead further. A long-angled clearance by Brendan Clarke found Chiedozie Ogbene on the left, whose persistence saw off challenges from Colm Deasy and Luke Gallagher, before scuffing the ball past Stephen McGuiness.

On the hour mark, Limericks player of the month Lee-J Lynch was denied a spectacular goal as he unleashed a shot from 20 yards which cannoned off the crossbar.

Man of the Match Chiedozie Ogbene was speaking to Limerick FC following the game and said that the team now want to push on and challenge for European places. Video courtesy of Limerick FC.

MAN OF THE MATCH Chiedozie Ogbene spoke to LFC TV following an excellent performance in our 3-0 victory over Drogheda United.

Substitute Dean Clarke should have added a fourth for Limerick as he was played through by Rodrigo Tosi, but his shot was deflected on to the crossbar by Stephen McGuinness. Immediately afterwards, Drogheda’s former Irish international Stephen Elliott placed a shot straight at Brendan Clarke in what was the visitors first clear chance of the game.

With five minutes remaining, former Shamrock Rovers player Clarke curled a shot which was excellently saved by Drogheda’s McGuinness.
Willie Boland will be delighted with the performance from Limerick and has picked up two wins from his two games in charge.