Munster scrape past Ulster but major improvement needed for next week.

With ten minutes remaining Munster’s Dave O’Callaghan barrelled over for the decisive try to seal a dramatic 22-20 win over interprovincial rivals Ulster and book a home semi final with two games to spare.

Heading into the game, Munster knew a win would seal a top four spot while Ulster’s hopes of making the playoffs here hanging in the balance

Rory Best and Angus Lloyd traded early tries but an otherwise cagey and error strewn first half saw the sides head to the dressing room locked at 10-10. 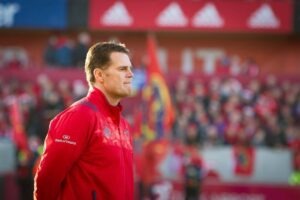 Plenty to ponder for Rassie Erasmus

Rassie Erasmus would not have been happy with Munster’s performance and for the second week in a row, inaccuracy and errors prevented the side from taking advantage of good scoring positions.

Both teams came out in the second half with a renewed vigour with the lead changing hands four times in a see saw affair before O’Callaghan clinched the win.

The victory means that Munster have now suffered just one loss in competitive rugby since mid-December.

Ulster started the second half brightly with a Jackson penalty nudging the northerners ahead before a superb Francis Saili break put the impressive Keith Earls through for a well finished try.

The step, power and pace is exactly what Munster fans have been hoping to see from Saili and the former All-Black is certainly delivering the goods this season.

Luke Marshall then restored the visitors’ lead but O’Callaghan found the try-line late on and Tyler Bleyendaal nailed the conversion for the win.

It ends Ulster’s unbeaten Guinness PRO12 streak at seven games while Munster are now undefeated against Ulster in their last six meetings.

A hectic start saw the sides level at 7-7 with only six minutes played. Indeed it was the visitors who got out of the blocks quickest with Rory Best try from the back of an unstoppable driving maul.

Jackson converted but Munster struck back when a Peter O’Mahony surge broke the Ulster defensive line and Lloyd crossed against the side he on loan from with Keatley adding the extras.

An offside then gave Jackson the chance to slot a 13th-minute penalty, which he duly did, as the visitors continued to control the territory.

That domination led to another penalty following a high tackle but Ireland fly-half Jackson missed what was an extremely kickable chance.

Munster finally began to get a foothold in the lead up to half-time and when Ulster pulled a scrum down in their own 22, Keatley made no mistake from the tee.

Things could have got even better for Rassie Erasmus’ men before the break but Andrew Conway was held up over the line.

The resultant 5 metre scrum was not controlled well and Munster went backwards before O’Donnell knocked on to end the half.

Ulster’s leading try-scorer this term, Jacob Stockdale, thought he had given his side the lead early in the second period when he went over the whitewash but the try was ruled out for a forward pass in the build-up.

The Ulstermen edged ahead with another Jackson penalty in the 52nd minute after Munster were pinged for a breakdown infringement.

They settled for a 52nd-minute three-pointer for Jackson after the Munstermen were penalised at the breakdown to edge 13-10 ahead but, with an hour played, Earls got his try go 15-13 ahead.

The lead was short lived with a sublime Jackson pass putting the lively Luke Marshall in for a fine try which the out half then converted to move Ulster five points clear with only 15 minutes remaining.

But once again, Munster showed huge belief and resolve. They didn’t press the panic button and instead kicked a penalty to the corner to set up a driving maul which was the foundation for the O’Callahgan try.

Bleyendaal – introduced for Keatley shortly after the break – held his nerve with the conversion.

Down by two points, Ulster set about creating a drop goal platform but unlike Rory Scannell in the reverse fixture, Jackson’s effort was wide right as time elapsed.

All is not lost for Ulster with and with a crucial away trip to Ospreys next weekend followed by a home fixture against Leinster.

Munster are guarnateed a semi final spot and need to take just 2 points from their remaining fixtures of Treviso away and Connacht at home to guarantee a Thomond Park semi final.

For now, Munster have bigger fish to fry with Saracens on the horizon at the Aviva next Saturday.

Erasmus and Co. know know that major improvement is needed heading into next week. For the second week in a row, Munster have turned in a mistake ridden performance.

They were under pressure from the Ulster line out and didn’t defend the maul particularly well. That coupled with some uncharacteristic handling errors and other inaccuracies means that there is work to be done at their UL base this week.

However, this team deserve huge credit for grinding out two hard fought results over the last fortnight. All in all Munster are well set for what promises to be a huge week.