Limerick endured a bitterly disappointing defeat at the Markets Field as Finn Harps won 0-2 courtesy of goals from Tommy McBride and Danny Morrissey. The gap between the teams is just one point and Limerick find themselves just three points ahead of Sligo, who occupy the final relegation place in the league table.

Limerick started brightly and a poor clearance from Finn Harps’ Ibrahim Keita fell straight to Bastien Hery who fired over the bar from the edge of the box. The Frenchman was fouled by Paddy McCourt while taking the shot. Rodrigo Tosi’s resultant free-kick was deflected wide for a corner which came to nothing for the home side.

Limerick continued their dominance and superb build up play ended in a Lee-J Lynch cross to the back post being beautifully controlled by Shane Duggan but the captain couldn’t direct his effort on goal.

Immediately afterwards, Limerick should have taken the lead. A perfectly waited through ball by Peter Berki fell to Lynch who was denied by a great save from Ciaran Gallagher when he looked certain to score.

A poor clearance from Harps centre-back Damien McNulty was intercepted by the lively Lynch, whose drilled effort was deflected wide of Gallagher’s right-hand post. From the resulting corner, Barry Cotter rose highest to flick the ball on and Peter Berki was quickest to react, but the Hungarian’s effort was cleared off the line.

Finn Harps took the lead totally against the run of play as poor defending on the left-hand side allowed Eddie Dsane to the byline and his low drive was parried by Brendan Clarke into the path of the waiting Tommy McBride who placed his shot into the empty net.

In injury-time of the first period, the home side were handed the perfect opportunity to level the scores when Berki was taken down by Killian Cantwell inside the area and Tomas Connolly awarded a penalty. The latter received a second yellow card and was duly sent off. However, Limerick’s top scorer Rodrigo Tosi blasted his penalty off the post and the whistle sounded immediately to end the first-half. 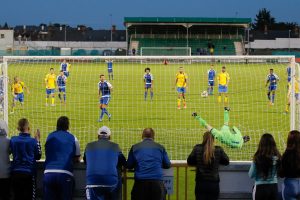 As the second half began, Finn Harps replaced Ibrahim Keita with the energetic Danny Morrissey as they attempted to catch Limerick on the break while defending from deep positions. Limerick introduced Stephen Kenny and Henry Cameron as they attempted to stretch Harps, while switching to a 3-5-2 formation.
Chiedozie Ogbene had the first chance of the second-half but he fired an effort over the crossbar.

The visitors were frustrating Limerick who failed to utilise the wide areas. Limerick were punished for a poor second half showing as Danny Morrissey pounced on a mix-up between Joe Crowe and Brendan Clarke to slot the ball into an empty net and double Finn Harps lead.

The home side failed to create a chance of note until the final five minutes when a Bastien Hery long range effort rattled the post. The Shannonsiders failed to test Gallagher as they tried a series of shots from distance but Ollie Horgan’s men defended heroically to deny Neil McDonald’s men.

The Limerick District League Premier Division kicked off on Thursday night with plenty of goals scored and no ...
Read More →

Adrian and Noel delve into another week of action for Treaty United in the latest episode The latest ...
Read More →

This is the second part of our preview ahead of the Limerick District League Premier Division kick-off tomorrow ...
Read More →

After a wait of two and a half months since the Lawson Cup final between victors Pike Rovers ...
Read More →

The Irish international had spent the last four years plying her trade in the Frauen-Bundesliga in Germany. Celtic ...
Read More →