Tomorrow the whole of Europe will be taking a keen interest in Munster’s last 4 Champions Cup clash with reigning champions Saracens in the Aviva Stadium. Days removed from the Lions squad announcement, Assistant coach Andy Farrell will have particularly keen interest in the clash.

Farrell has been Ireland’s defence coach for the past year and has worked with each of the Munster men selected for the Lions. Furthermore, he was a defensive consultant to the Munster team last year for four months. Yet that is not where the connections end. Andy’s son, Owen, is Saracens key man and will be expected to release Saracens flair players out wide.

Ahead of the game, Farrell has insisted that there is nothing between the teams,

“Saracens have been masters over the last period of time of playing the game in front of them, no matter where they’re playing but I’m sure they’re aware of the army of red that’s going to come to the Aviva and a Munster side that is bang in form at this moment in time.

“I wouldn’t call it, I definitely wouldn’t.”

The players chosen for Lions duties are to meet in Wales first and then Carton House for two weeks of training camps before heading to New Zealand. However, those still with a chance of silverware may not get the chance to convene until days before the squad heads to the Southern Hemisphere.

This adds another dimension to this already intruiging game as both sets of players will be looking to impress, especially the 8 Lions on show (Conor Murray will miss the game through injury). 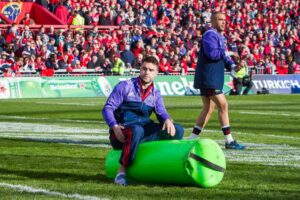 At the line out, Peter O’Mahony will be hoping to showcase his skill against the lock pairing of Kruis and Itoje who have also been selected to the Lions squad. Against England, O’Mahony dominated the line out and gave a man of the match performance in defeating the English. Farrell was not at all surprised by O’Mahony’s impact.

There will also be fierce competition at No.8 as CJ Stander and Billy Vunipola square off. The latter is expected to start at the back of the scrum for the Lions with Stander at 6. However, such is the competition in the back row, both men will be keen to make the required impact to impress the coaches.

Yet, at the end of the day, these players will be more focused on Saturday and getting their respective teams to a champions Cup final in what promises to be a classic encounter.