Lions roar back to take test series to final weekend

The British & Irish Lions roar back to level the series heading into next weekend’s grand finale.

Sonny Bill Williams was sent off as the British and Irish Lions claimed a thrilling Test series-levelling 24-21 victory over world champions New Zealand at Westpac Stadium.

The All Black centre was shown a straight red card by French referee Jerome Garces after just 25 minutes for a dangerous shoulder charge to the head of Lions wing Anthony Watson.

Despite the persistent interventions of Jaco Peyper, Garces arrived at 100% the correct decision and in the process Williams became the first All Blacks player to be sent off in a Test match since Colin Meads against Scotland 50 years ago.

In what was an epic struggle it wasn’t until the 77th minute that the Lions finally took the lead courtesy of an Owen Farrell penalty to set up a series decider in Auckland next Saturday.

Cue a first home defeat for New Zealand’s since South Africa beat them in 2009, and their first against the Lions for 24 years.

Ill-discipline was again a huge issue of the Lions with All Blacks fly-half Beauden Barrett kicking seven penalties from 10 attempts. Two things were identified as being key to improving on last week’s performance, discipline and taking their chances.

The Lions certainly took their chances with second-half tries by number eight Taulupe Faletau and scrum-half Conor Murray – plus 14 points from Farrell eventually seeing them home.

While Gatland will be happy with their efficiency, their discipline is certainly something that needs improvement.

The elements in Wellington saw rain sheeting down as the tourists made a solid start with Alun Wyn Jones getting stuck in early on. A Maro Itoje knock on ruining an early chance inside the opening minutes.

Barrett his the post from his first penalty attempt of the night but made no such error with his second effort to give the All Blacks a 3-0 lead before Farrell landed a superb kick from just inside New Zealand’s half to level proceedings.

Then came the pivotal moment of the night, TV replays showed the incident from several angles before Garces came to the correct decision.

“there is a clear shoulder charge on the head, I have no option, I have to protect the player.”

The Frenchman had no hesitation in brandishing red to Williams, while Watson departed for a head injury assessment and was temporarily replaced by his fellow England wing Jack Nowell. 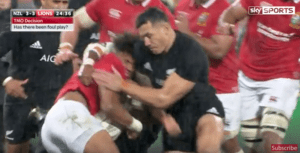 The All Blacks were not really up against it, facing a huge task and with the Lions seemingly intent on self destruction with the repeated concession of kickable penalties, the home side almost pulled off an improbable victory.

Barrett and Farrell exchanged penalties in quick succession before Barrett completed his hat-trick, but there was still time for Farrell to follow suit, making it 9-9 at half-time.

New Zealand began the second period in determined fashion, only for Barrett to miss an easy penalty chance after Itoje drifted offside, which allowed the Lions a considerable let-off. 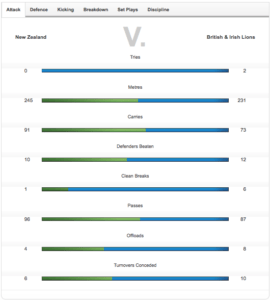 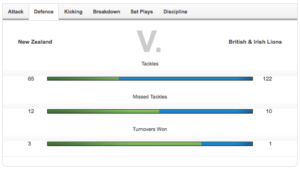 Conor Murray was then penalised for a high tackle with Barrett slotting a 35 metre attempt to go 12-9 ahead. Another penalty moved the gap to 15-9.

The Lions presented Barrett with his 3rd penalty in a poor seven minute window but the Hurricanes out half pushed it wide of the posts. Mako Vunipola’s reckless late lunge on Barrett was currently penalised with the Saracens player send to the bin.

Barrett showed no signs of any ill effects as he kicked the resultant penalty to stretch the lead to 18-9.

The home side were now beyond a converted try and the Lions needed to respond and quickly. The did just that with a sweeping Lions move ending in Wales star Faletau touching down wide out to set up a thrilling final quarter.

Barrett’s kicked his seventh penalty of the evening after the Lions fell offside inside their own 22, only for Munster’s Conor Murray to storm through a gap, touch down and see Farrell boot a match-levelling conversion.

With a draw looming, the Lions would need to engineer one last chance to take the series to next week. It came via a penalty when All Blacks prop Charlie Faumuina was punished for an illegal challenge on Kyle Sinckler.

Up stepped Owen Farrell to kick the Lions to a historic victory.