LISTEN: John Kiely “it would be very foolish of any team to take Antrim lightly”

A heavily reduced Limerick side travel to Antrim this Sunday in their penultimate League clash. Limerick have been impressive so far this campaign with three wins from three, and know that a win over Antrim will set up a winner takes all clash against Galway in Pearse Stadium next Sunday. Antrim meanwhile are pointless so far and lie bottom of the table.

However, John Kiely is taking nothing for granted against Antrim who have put in a string of good performances despite results going against them.

“If you look at the table, the three games Antrim have played have been against Galway, Dublin and Laois and while they haven’t managed to get a win they’ve only lost the three games by accumulative score of nine points. They’ve had three very tight games against three good sides.

“I think it would be very foolish of any team to take Antrim lightly… They are very difficult to break down and they have a brilliant free taker in Colin McManus.”

Limerick are without over 20 players for the clash with the Na Piarsaigh contingent remaining at home in preparation of a March 17 All Ireland final clash with Cuala. Limerick will also be without their UL stars as they face DCU on Saturday in the Fitzgibbon Cup final in Mallow. Seven members of the squad named to face Laois last week are members of the star studded UL side. 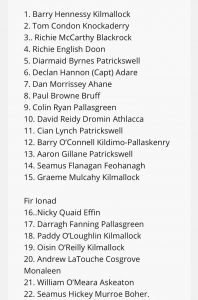 However, the absence of such players means there are chances for other members of the panel to impress. Graeme Mulcahy and William O’Meara return to the squad after missing the opening three rounds through injury. Mulcahy is named from the start while O’Meara waits in the wings for his League debut.

Kiely said, “There’s a very good panel overall there at the moment. Forty players of the very highest standard in the county. It’s a fantastic honour to be able to look after them, to help them along and facilitate them to be as good as they can be.”

Should Limerick get over the line, the Galway clash will effectively become a Division 1B final. Although they are defending All Ireland champions, Galway are yet to hit the heights of last year this term. Limerick meanwhile have gone about their business impressively so far in 2018. Yet, John Kiely will not be looking past the trip to Antrim as Limerick aim to bridge an eight year gap back to Division 1A.

“At this stage its down to the wire in this division…Ideally we would like to be in a position going to Galway having won all our games but it’s going to be a tough challenge.”

“It’s a long journey, there’s a lot involved in it, ideally we would like to get a win out of it.”

Listen to the interview in full on the link below.