LIT Celtics prepare for first home game of the season

LIT Celtics take on Killarney in their opening Home game this Saturday night following a loss against the EJ Sligo All-Stars last Saturday.

The Limerick side came out on the wrong end of a closely contested affair in the season opener, 96 – 91 the final score in front of a full house in Sligo.

Matt St Armour put in a strong performance for the Celtics, netting an incredible 56 points on the night.

Celtics’ young players made a huge contribution in the game, with Jordan Hehir scoring 11 points and Cian O’Reilly claiming 7. Emmett Brown and Tommy Walsh both had impressive games with some excellent scoring and defence on the night.

LIT Celtics were without two of their main players last weekend, however, there’s positive news this week as Krystian Burchardt will be available for this weekend.

LIT will have to wait on Andre Clerigo though, the Portuguese signing won’t be available to play for another few weeks due to a Basketball Ireland residency rule. 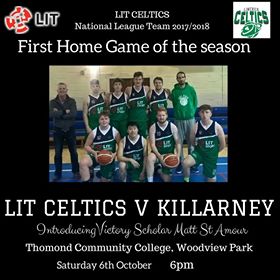 Tip-off for the Limerick side’s game with Killarney is 6pm this coming Saturday in Thomond Community College and a large crowd is expected on the night.

Spectators are encouraged to try to get to the venue early to ensure a seat for the men’s national league tie.