Minor Footballers look for strong start to Munster Championship against the Deise.

Limerck Minor Footballers welcome Waterford to the Gaelic Grounds this Wednesday evening in the opening round of the 2017 Munster Minor Football Championship. Minor manager John Ryan has named a 31 man panel for the match with a total of 17 clubs represented in the squad. 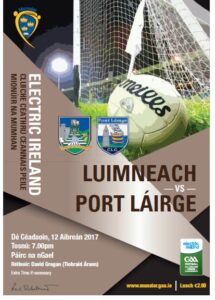 Limerick will be hoping to continue on from the previous two years where they have shown visible signs of improvement at underage level. In 2015 Limerick were impressive winners over a strong Waterford team in Newcastle West, whilst last year they were equally good defeating the Deise comprehensively 1-13 to 1-5 in Leamybrien.

Last year’s minor squad also overcame Tipperary and were only narrowly beaten by Cork in the Munster MFC Semi Final. This is the exact same case for this years u21 team who defeated the Premier County and were unlucky against the Leesiders.

Ryan has a back room team consisting of Brian Nolan as coach alongside Cathal Minihane and David O’Connor as selectors. These men will be hoping to continue the recent success of underage football in the Treaty County.

In a repeat of the All-Ireland final from two years previously, Galway made Limerick work all the way ...
Read More →

It has been a lengthy wait for both sides since their semi-final wins in late October with 42 ...
Read More →