So after a mammoth disciplinary hearing lasting almost four hours, Sean O’Brien is free to play in the final test of the tour at Eden Park on Saturday.

The Leinster backrow was one of the standout performers in Saturday’s epic encounter, but was cited for ‘dangerous play’ after allegedly striking New Zealand winger Waisake Naholo 19 minutes into the second half. 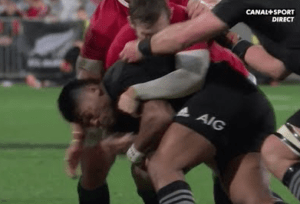 At Sunday’s hearing O’Brien was cleared, something that the New Zealand media has not exactly been over the moon about, especially after the same citing commissioners have slapped a four week ban on Sonny Bill Williams for his shoulder charge on Anthony Watson.

Stuff.co.nz, led with the O’Brien verdict where they emphasise that the offence was deemed worthy of a red card but no ban was handed down. Another bugbear is that the panel of judges were all Australian.

British and Irish Lions flanker Sean O’Brien is free to play the third rugby test against the All Blacks after his citing for allegedly striking wing Waisake Naholo was dismissed.

In a significant boost for the touring side, an all-Australian judicial panel of Adam Casselden, David Croft and John Langford cleared O’Brien after a marathon hearing at New Zealand Rugby headquarters in Wellington on Sunday. It stretched more than three-and-a-half hours.

Video of the incident in the 59th minute showed O’Brien making contact with Naholo’s jaw with a swinging arm after the All Blacks wing received a kickoff and was tackled.

Richard Knowler wrote that O’Brien’s incident was a major controversy in his piece ‘How the Lions shocked the All Blacks in the 2nd test‘.

Lions flanker Sean O’Brien was cleared for using a swinging arm to crude effect into the head of Naholo in the second half. O’Brien escaped censure by the on-field officials, but the citing commissioner got his man, deeming it a “red card offence”. Naholo retired for a concussion test. Nevertheless, O’Brien is free to line up in the third test.

Surprisingly enough the New Zealand Herald, did not get caught up in any perceived conspiracy theories as to why no suspension was meted out, rather just focused on the nuts and bolts of the hearing.

Naholo had to go off for a concussion test and did not return to the field. The Citing Commissioner said the incident, in the 19th minute of the second half, was deemed to have met the threshold for a red card, therefore was worthy of a judicial hearing.

The Carlow man has been superb with the ball in hand and also in defence. New Zealand will undoubtedly use the decision as a motivation to convince themselves that the world is against them.

For Gatland and his coaching team, the decision is a massive break.