Munster’s Peter O’Mahony will captain the British & Irish Lions against the Maori All Blacks Rotorua International Stadium on Saturday, one of seven Irish players in the matchday squad.

Warren Gatland has confirmed that the Munster flanker will keep the armband even if as expected Sam Warburton is introduced off the bench.

Johnny Sexton and Conor Murray will form the half-back pairing on Saturday at 8:35am for what is being billed as the ‘4th Test’ as the Lions look to bounce back from the defeat by the Highlanders.

The team has shipped plenty of criticism lately for not being able to close out tight games and the Maori will be another huge test of their abilities.

Tadhg Furlong joins Saracens pair Mako Vunipola and Jamie George in the front row, while O’Mahony will have international team-mate Seán O’Brien and Toby Faletau for company in the back row.

Leigh Halfpenny given the nod at full-back, and Anthony Watson and George North selected on the wings. Jonathan Davies has passed his HIA and will form a midfield partnership with Ben T’eo.

Davies was particularly pleased with the faith shown in him by Gatland.

“To get the nod from Warren this weekend is hugely special, not just me but for all the clubs, people and family who have put effort into me.”

Jack McGrath and Iain Henderson are poised for action off the bench.

Owen Farrell was due to play a substitute’s role but the England man has suffered a quadriceps strain in training and has been withdrawn from the Maori clash, replaced by Wales’ Dan Biggar.

Speaking to the media, O’Mahony says the captaincy is a special moment in his career.

“It’s a huge honour, obviously to be picked for the Lions at all is a massive honour,” he said.

“To get the nod from Warren this weekend is hugely special, not just me but for all the clubs, people and family who have put effort into me. It’s a huge honour.

“We want to win but first and foremost we need a performance. Whatever comes after that is what comes.

“We need to be stepping up and guys to stick your hands up.”

Tour captain Sam Warburton has been suffering with injury and form throughout however, Gatland insists tour captain Warburton will take it on the chin if he does not win selection for the first New Zealand Test.

“Sam’s well aware of the competition that is there at the moment,” said Gatland.

“He fully understands that that loose forward trio (O’Mahony, O’Brien and Taulupe Faletau) went outstandingly well against the Crusaders.

“The challenge for them is to repeat it. And if they do it again, we’ll make what we think is the right selection for the Test match.

“One of the reasons we selected him as captain of the squad is that he is an absolute quality player.

“But this tour isn’t about Sam Warburton, it’s about putting the squad first.

“If he’s not involved in the first Test because of the performance on Saturday night he will fully understand that. 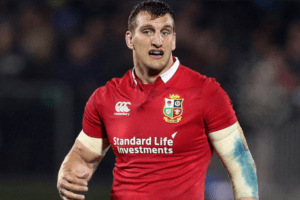 Warburton has been out of sorts to date on the tour

“But he’ll get some game time and some opportunity to keep improving his match fitness because he hasn’t had a lot of rugby in recent weeks.

“This is important for him. He got a run-out against the Highlanders, I thought he was good for a long period of the game.

“Sean O’Brien hasn’t had a lot of rugby either. So they’ll both get game time and Sam gets another chance on Saturday night to come and perform.

“Peter will continue to lead the team (if Warburton comes on); I think that’s only fair.

“You wouldn’t change your match captain to your tour captain as he comes on the field. Sam’s comfortable with that.

“I don’t think that’s the right thing, that’s not the normal way that would happen.”

Gatland insisted Warburton’s ability to cope with setbacks and remain resolute was one of the key reasons why he was named Lions captain in the first place.

“Sam’s character is hugely helpful; sometimes guys will be disappointed, one or two may feel they haven’t had a chance,” said Gatland.

“That’s the hardest thing about going on tour. But it’s how you deal with that.

“We want people disappointed if they are not selected, but it’s then how you deal with that and how you respond.

“You’ve got to put that behind you, and be a positive influence and positive character around the squad. So far we’ve seen that.”

Gatland hailed Saturday’s Lions captain O’Mahony as a man who can bring the intangible will to win that has underscored Munster’s modern-era success.

“I think sometimes it’s not something that you can quantify, what Munster bring to a game,” said Gatland.

“It’s a special pride, sometimes the performances they can produce, (they’ve) done consistently over the years – being able to dig deep and bring performances from places where individuals and collectively people often can’t do.

“That’s what Peter will bring to the team on Saturday.”