Pat Donnelly – “They’ve proved what we always knew they were, a very good team and it’s great for the county.”

Limerick are U21 All-Ireland Champions for the second time in three years. On Saturday last, Limerick were simply too powerful for Kilkenny as they sealed the triumph with a 0-17 to 0-11 victory over the cats. In truth, Limeick were in control from start to finish and were complete value for the win.

Limerick emerged from Munster after defeating Tipp, Clare and Cork in the final, all played in the Gaelic Grounds incredibly. The semi-final victory over Galway would ultimately prove to be their biggest test as they came away from Thurles with a two point win to seal a place in the final. 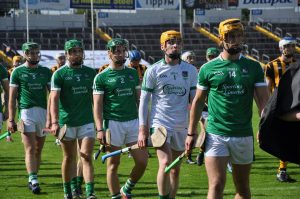 Limerick in the pre match parade

After the final, we got the thoughts of Pat Donnelly after what has been an excellent first year in charge of the side for the South Liberties man.

“Fantastic feeling. You can see the emotions here out on the pitch. Great for the lads, I’m delighted for the players, they put in all the work. Delighted for the back room team and all involved.”

“They’ve proved what we always knew they were, a very good team and it’s great for the county.”

After winning the toss, Limerick chose to play withe the aid of a strong breeze for the opening period. Despite Kilkenny opening the scroing, Limerick would go on to score seven in a row to hold a six point lead after just 15 minutes. As the referee blew the whistle to to signal the end of the first period Limerick held a commanding 0-11 to 0-4 lead. When asked about his sides position at the break Donnelly said,

“I always said I’d rather be ahead by seven points and see how the second half takes us. We dug deep and didn’t let Kilkenny score in the first ten minutes of the second half and I think that was a crucial period.”

When Kilkenny’s purple patch came with 15 minutes remaining, the players stayed calm and ensured that Limerick would be comfertable in holding out for a famous victory. Lead by the highly impressive Kyle Hayes at centre back and Robbie Hanley in midfield, Limerick were able to continue to add on scores throughout the game to confirm theit victory.

Although Limerick came through Tipp, Clare, Cork, Galway and Kilkenny to land the title, they entered every game as favourites, something which often throws off a team. However, to their credit, they were full value for their favourite tag as they were deserved winners of the competition. The tag was someting that Pat Donnelly was pleased about as he felt it showed his players the respect that they deserved.

“Mikey Kiely, Mossy O’ Brien and Brian Goley have worked tirelessly with these boys for the past nine months. Out on the pitch, working on their touch, working on everything.”

With Limerick now without an All-Ireland Senior Hurling title since 1973, there is a renewed hope that this group of players can be the ones to bring back Liam McCarthy to Limerick. With two U21 All-Ireland triumphs in three years as well as a couple of Munster minor championships since 2013, there is no doubting the talent at John Kiely’s disposal over the coming years.

“You see the physique of these lads. They’ve done everything right and if they continue to do that, then Limerick will be contesting Munster and Senior All-Ireland finals in s few years.”

One thing is for sure, patience will be required, there will be mistakes and ups and downs along the way but this Limerick side are really primed to make a run at a senior title in the coming years.

You can listen to Pat Donnelly’s post match reaction in full on the link below.