The province would have been expected to see off the Italians with relative ease coming into the game but key stats such as 484 metres gained off 48 carries, and 12 offloads showed that the preseason work focusing on establishing a more dynamic attacking game may be coming to fruition.

Director of Rugby Rassie Erasmus says that last year, he and his coaching were more largely focused on developing the mechanical side of the game but says this season Munster must move forward and evolve their attacking play, following a full preseason under his watch.

“We have to evolve. The first thing that most new coaching staffs or management teams try to fix are the mechanical things, like the breakdown, the scrum, the maul, the defensive system because it’s mechanical stuff, it’s not skill based, the moment you get players thinking the same way you can make it work.”

“Counterattack, dynamic play, continuity those things always take a bit of time before people are comfortable. It was something last year that I wouldn’t say we were terrible at. We were one of the top scoring teams from turnovers but we definitely lacked a dimension just because of the amount of time we had together.”

“We’re trying to get better at it and hopefully in every game you’ll start to see a bit more of that. We didn’t have time last season to work on those things, we’ve had 8 or 9 weeks now (this preseason season).”

Despite making huge progress last year, Munster’s end of season report card would have indicated a ‘could do better’ when it came to attacking prowess. Especially when it came to unlocking the better defences. It was a chink in Munster’s armour that was brutally exposed against Saracens and the Scarlets in the space of a painful few weeks at the end of the last campaign.

The general consensus is that when faced with opposition that Munster could dominate physically that the tries would come from pure pressure whereas when faced with stronger more physical sides, Munster were falling that little bit short of the mark.

The additions of Chris Farrell, James Hart and the return of JJ Hanrahan will certainly help in terms of attacking options but the attacking mentality also needs to move to a more offload focused game, reducing the amount of rucks and keeping opposing defences guessing. 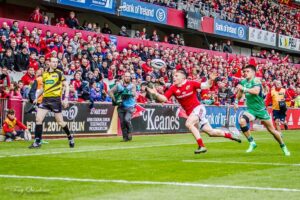 Andrew Conway has been a huge part of Munster’s counterattack

While only one tiny part of last week’s game, one piece of play that stood out was in the build up to Alex Wootton’s bonus point securing try. Man of the match Andrew Conway broke away and rather than looking to place the ball and wait for the forwards, his first instinct was to look for the offload.

Erasmus says that he knows his side are capable of this type of play in low pressure situations but need to have the confidence to implement a more skilled approach with the game on the line.

“We can do it in low pressure situations when we’re 30 points up. I think the trick and the skill is when it’s a tight game to still do those things and keep believing, and even if it doesn’t work to try again, obviously without losing games by doing it.”

Nobody can deny the progress Munster made last year which makes Erasmus departure all the more frustrating. The South African and his backroom staff have certainly steered Munster in the right direction, it’s will soon be up to his successor – who ever that may be – to ensure that the province’s upward trend is maintained.