Taute ready to roll and put injury nightmare behind him

“I’m not going to lie, it’s difficult to come back from a serious injury. Luckily I have been there before so I know what to expect and how to deal with the process but it’s been long.”

That’s the view of Munster centre Jaco Taute  as he nears a return to action after nearly a year out with an anterior cruciate ligament injury.

Taute is now in line to play some part in Munster’s second competitive game of the season against Glasgow Warriors in Scotland this Friday.

“It’s been 11 months and I’m fully fit,” insisted Taute. “I made sure I proved my fitness and it’s great to be back. I have been training with the team the last few weeks. It’s great to be back playing rugby and not just rehabilitating in the gym because that gets lonely.”

Taute has used his time off the field well by finishing his degree in Financial Management. It has been a welcome distraction from the hum drum of rehabbing the knee injury.

A career in business is in the offing for the 27-year-old when his career comes to an end but he is hoping that he has plenty of seasons left in the tank.

“I hope rugby never finishes,” he said with a smile. “I would like to get involved in the business world. That will be the plan but for now I’m still young and I want to focus on rugby and the studies are behind me now.”

Munster face a Glasgow side that have become a major rival in recent years Taute believes that it will be a tough contest when they visit Scotstaun but one that they can come out on top of.

“I think there is always a special occasion when these two teams play each other. They are a very good team and have shown that in the way they have played and the results they have achieved.

“It will be tough. What impressed me was that they were nine and got a yellow card last week (against Connacht) and still managed to get the win, it’s a sign of a good team. They have been performing so it’s going to be a tough occasion for us but something we look forward to.”

Munster impressed in their opening fixture against the Toyota Cheetahs at Thomond Park last Saturday, scoring six tries in a 38-0 win.

Much of the talk post game was Joey Carbery’s came in the final quarter and Taute has been impressed with what he has seen of the out-half up to now.

“What I have seen with him is an excitement. He has trained very well and is full of energy. He brings a different dimension to our attack.

“He is a very good playmaker and I felt when he came on that the game was already won but what he showed was a bit of flair and a bit of that attacking shape that can put someone else in space.

“I really like him and I think he is excited for what’s to come in his career as well. I can’t wait to see who this story develops.”

Taute is also well aware that the long term injuries that he and fellow centre Chris Farrell picked up have opened the door for other players.

Sammy Arnold and Dan Goggin are two of the players that stood up to be counted and Taute knows that he will have to take his chance when the opportunity arises this season.

“They grabbed their chances with both hands,” commented Taute on Arnold and Goggin. “They have been playing very well and that’s the sign of a good team, guys pushing each other.

“Me and Chris coming back, when we get the chance, we have to take it. It’s going to be tough but it’s good for any professional environment to know that when you get your chance you have to take it. Otherwise, you won’t maybe get another one.” 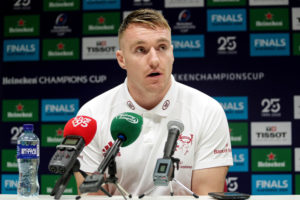 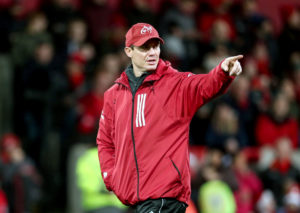