The UL Vikings lost out by a point to the Carrickfergus Knights in Antrim on Sunday.

UL were forced to make the long trip up north, and it was possibly one of the defining factors behind their 21-20 loss.

This away trip was determined on the last day of the regular season as the Vikings lost out to rivals the Dublin Rebels. The loss ended the hopes of a perfect season and ensured that UL would have to face into a wildcard game with the Cork Admirals, they secured victory in that game but then faced into an away semi-final with the Knights.

Had they managed to secure a second victory of the season over the Rebels it would have set up a home semi-final, and things may have turned out differently. 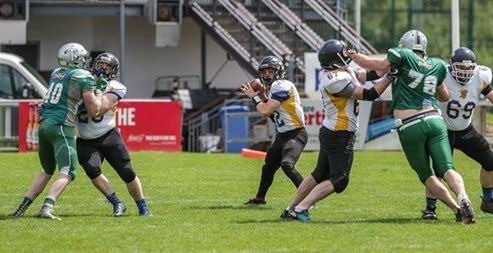 That being said the Vikings should be proud of the season they put down. They won their first 7 games, and put in a dominant performance in the wildcard game, while in the end were oh so close to a Shamrock Bowl final appearance.

In other Vikings news club stalwart Liam Ryan has announced that he will be hanging up his boots, the three-time Shamrock Bowl Champion revealed the news on his personal Facebook page following this weekend’s loss.

We at Sporting Limerick have thoroughly enjoyed covering the UL Vikings and hope to bring you more content on the Limerick side next season, as American Football in Ireland continues to grow in popularity.