With the senior hurling final behind us, all eyes will turn to Thurles this Saturday as Limerick take on Kilkenny in the U21 All Ireland hurling final at 3pm. This is a meeting of the early season favourites as both survived tests along the way to provincial successes.

Although Limerick were victorious in this competition in 2015, Kilkenny are without a title at this grade since 2008. In such a hurling stronghold, this can be seen as a famine and after a disappointing year for their seniors, all focus has turned to this U21 Kilkenny side.

However, Limerick have retained a number of that 2015 side and will be quietly confident in their chances come Saturday. We caught up with one of those players, Captain Tom Morrissey to get his thoughts ahead of the final.

“They (Kilkenny) are a good team, we know from three years ago how good they will be. They beat us in the minor final three years ago and they’ve been looking very good this year so far.

“You can’t really tell much from the semi-final alright, but their Leinster campaign was very impressive, they won every game with ease so we definitely won’t be taking Kilkenny for granted in the All-Ireland Final.”

These sides met in 2014 in the All-Ireland minor final where Limerick were also seen as slight favourites. However, in a typically clinical display from the Cats, two goals from the Leinster ensure a 2-17 to 0-19 victory. Yet Limerick will have ten starters from that day in 2014 in their XV on Saturday so no extra motivation will be needed from Morrissey and Co. When asked about will that game be in the back of their minds,

“We’d be lying if we said it wasn’t. Three years ago, on the All-Ireland Final stage to lose, you’re going to remember it for the rest of your life and to get a second chance to redeem it, hopefully is what we can do.”

After the disappointment of losing against Tipp last year, despite retaining a vast number of the victorious 2015 team, Limerick were keen to make a mark in this year’s championship and did so with a commanding win over Tipp in the Quarter final. Limerick were earmarked as favourites for the All-Ireland crown early on and have coped well with the favourites tag so far.

“Yeah, we’re used to being favourites. If I’m being honest its 50/50, we know that ourselves, we’re not treating it that we’re favourites. A two-horse race, anyone can win. I suppose the only day where we really felt the pressure so far was maybe the Cork game.”

“We were a bit tense, that was a final so you feel that there’s a bit more at stake because it’s a final. Listen this team has plenty of experience since the minor grade the last few years so we’ll be okay with it and I think the lads will be fine come matchday.” 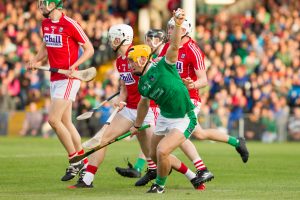 Limerick’s resolve was truly tested for the first time this year in the semi-final against Galway when they fell behind after a late Galway goal. To their credit Limerick never panicked and reeled off several scores to secure their place in the final.

“To be fair to the lads, we didn’t panic at all. We just stuck to the game plan. It wasn’t a case where we were lobbing ball into the edge of the square. We seemed to be really confident and I suppose we’ve been in that situation a good few times, there’s just a strong belief that we’re going to win no matter what situation is thrown at us.”

With eyes firmly fixed for this Saturday, Morrissey is confident in his sides chances.

“We know from past years that we are a very talented bunch and as you say 15 on 15 will definitely suit us. We will be confident even though we did lose to this Kilkenny team, we will be confident in our own ability as we always are.”

“I do think we have full belief that we will be able to get over the line and cope with whatever Kilkenny have to throw at us.”

You can watch Tom Morrissey’s interview in full on the link below.