The Women’s Rugby World Cup trophy stops off in Limerick.

So with Ireland set to host the 2017 Women’s Rugby World Cup later this year, excitement has been growing around the high levels of skill and professionalism exhibited both on and off the pitch in the women’s game.

Not only this but the tournament is seen as a huge opportunity to showcase the sport to a new generation of young girls in the hopes of fostering the next generation of talent for the IRFU to harness. 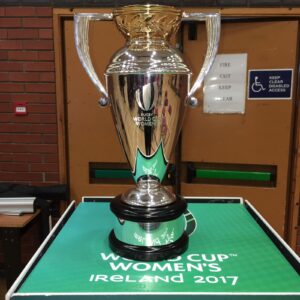 Thursday saw the Cup make a stop at Villiers School on the North Circular road where the theme of the event was very much the encouragement of young people especially girls to engage in sport at an early age and to continue participation through life.

And there was some heavy hitters in situ to get this message across. Joy Neville, former Irish grand slam winner and current international referee.

Speaking at the event, former Irish Captain Neville put a huge emphasis on giving young options to continue playing sport post secondary school and into third level education and beyond.

“I think It’s important to maintain some sort of physical exercise for mental health. With rugby I think it’s important that more development is put in place for kids post school.”

Fitness and well being aside, the camaraderie of being part of a team, of learning discipline and of dealing with success and failure are all huge parts of sport.

Such life lessons are not just confided to sports, they transfer across all aspects of life including work and personal interactions.

Not only this but being involved in sport and having an interest in sport can open all sorts of doors and networking opportunities, think of any number of Irish students who have emigrated or moved abroad and who have linked up with GAA and rugby clubs around the world.

“There is an initial fear element but if you can get over that and put yourself out there. Sometimes it’s easier said than done but once you can get to know someone who you can go along to training with, there is networking everywhere.

“Thats when your network will start to grow and give you those opportunities like finding a new job or updating your CV.”

Women’s rugby has come a long way in recent years which has been down to a hugely talented and committed group of players. Individuals who have not just played for their own benefit but have also strived to leave the game in a better state and with better support structures for the next generation of players.

More resources for dieticians, strength and conditioning and improved travel and training arrangements are just some of improvements implemented over the years.

Media exposure has also played a part. The Women’s Six Nations is not only televised live on prime time TV but it is also well attended and has served up some cracking games.

As one of the players currently enjoying being involved in the current Irish set up, Ciara Griffin is quick to remember the sacrifices of past players in getting the game to where it is today.

“It’s great that all the matches were televised this year but that’s all down to the success of the teams of the past with Joy and Fiona Coughlan and all those players.

“They all paved the way and luckily we are now reaping the rewards.”

Hockey internationals Rebecca Barry and Roisín Upton were recipients of sports scholarships in the United States and are living proof of the benefits of excelling in sports can offer an avenue to a quality education.

Roisin says it was a huge decision but she was glad she took it.

“I deliberated over weeks, i talked to my family and friends and it ultimately came down to what would I regret more, was it staying here or was it how much I was missing out on if I left.”

“It was a tough decision but I though, what have I to lose? The key thing was that we were presented with these opportunities and we had to grasp it.

“You can’t just let these things slide by you because some things don’t come knocking a second time.”

The students in attendance should take what these individuals say on board. All have got to represent their country at the highest level at their chosen sports; enjoyed unique experiences and made friendships that will last a lifetime.

While not everyone will play at the highest level, the key is participation and involvement and with that comes the added bonus of the effects on mental and physical health as well as some valuable life lessons.

Roll on the World Cup and a new generation of young people inspired to get out and get involved.

Listen to the interview in full below: