The predominant message coming from manager John Tuohy during the week was that he was preparing this Limerick side to have a cut, to give it everything and take the shackles off.

The team certainly followed his instructions to the letter as they put last years final disappointment behind them with a 1-13 to 0-14 over Cork in Charleville.

Tuohy was adamant that last year’s defeat – with two points late into injury time sealing the Cork win – was firmly in the past and Limerick were looking in one direction, forward.

Captain Niamh Mulcahy was imperious throughout with the Ahane player notching 11 points from the placed ball.

The Limerick of 2017 would not be denied and started with a goal in the first attack of the game as Caoimhe Lyons finished to the back of the net.

The first Mulcahy free of the day and a fine Cliona Lane point followed as Limerick led 1-2 to 0-1 after less than four minutes of play.

Cork finally found their stride with points from Gemma O”Connor settling the holders.

Mulcahy responded but then Cork took over with a flurry of unanswered scores to lead 0-8 to 1-3 by the quarter hour mark. 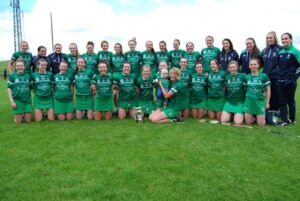 In what was tuning into a seesaw battle, Limerick then managed to wrestle back momentum with Tuohy’s side notching 7 points on the trot to take a 1-10 to 0-8.

Cork were struggling to deal with Limerick’s attack and any fouls we ruthlessly punished by Mulcahy. Of the 7-point flurry, Mulcahy frees accounted for 6.

The frescoing hurling was not replicated in the second half as Mulcahy added three more frees to Limerick’s total.

But while Limerick were not as free scoring in second half, they prevented Cork from making any real inroads into their lead.

While the team will enjoy today’s historic victory, focus will now switch to June 10-11 and the start of the All-Ireland Championship.

Limerick are grouped with Cork, Offaly, Tipperary and Wexford.