Limerick to learn from Offaly defeat and bounce back

Limerick Camogie manager John Tuohy is confident of a positive response from his squad.

The Limerick Camogie team were unlucky to lose out to Offaly by a single point in the first round of the All Ireland Camogie Championship on Saturday by 2-18 to 3-14.

In what was an end to end spectacle, both teams served up a brilliant game of camogie that was a fantastic advert for the game.

Speaking to the media after the game, Tuohy was disappointed with the result but proud of his team’s efforts.

“We are very disappointed to lose this game’. In fairness to Offaly they hurled very very well, I think they were the better team on the day’.

‘In fairness to them I think we still could have stolen this, the girls played exceptionally well in the second half, they did everything they could in the last 10 minutes to run at Offaly, and got some excellent points’.

‘We were very unlucky to miss out on a goal and if we got that goal we would have won the match’.

‘Look its a game of small margins, the girls will have to lift themselves and their training for the next match against Cork which is away in Cork in two weeks time’.

Limerick were missing a total of 9 players from the panel for a variety of reasons and while this was undoubtedly a blow, Tuohy was happy with how the rest of the panel contributed.

“We no longer depend on one our two girls, we have girls that can score from any angle and two subs came on and the two of them scored’.

‘We were missing a total of nine girls today, and to play against Offaly and to be so close to them I think I’m happy with that’.

With the Cork game coming up in two weeks he is hoping to have some of his players back.

‘We’re hoping to have two or three players back, Fiona Hickey will be back from her honeymoon, and a few of the girls back from the leaving cert and injury, we could certainly do with everybody being back going into this match’.

‘We’ll go out with our heads up and take on Cork’.

Cork got their campaign off to a win with a 1-16 to 1-7 point win over Tipperary and in fairness they never looked in trouble. Limerick now have little room for error and will be looking to repeat the result of their recent meeting go the Munster Final. 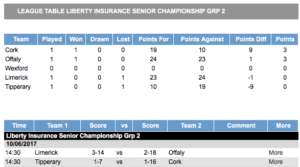