So who are the proposed Pro12 newcomers, Cheetahs & Southern Kings?

Southern Kings and Cheetahs are on the verge of joining a revamped Guinness Pro12.

We have heard it all before though as back in 2005, representatives from the Celtic Unions and SA Rugby announced their agreement for an exciting new ‘Celtic-Italy-South Africa Cup’ competition, with a working title, the Rainbow Cup. The tournament never materialised and no tears were shed.

South African teams moving north is seen as a better option financially due to the value of the broadcast rights and the time at which the games would be broadcast. However, given the similarities, the one thing yet to be discussed is travel time which is still considerable.

So don’t get booking your away trip to South Africa just yet, It is though that London could host home games for the Cheetahs and Kings in the early stages to allow them get properly established in the competition and any new format.

What happens to the next tier of rugby competitions, the European Champions Cup and the European Challenge Cup and whether they’d be eligible for inclusion is also unclear.

However this time around the proposals seem to be gaining more traction. So who are the Free State Cheetahs and the Southern Kings?

The Cheetahs joined the Super Rugby competition in 2006 and play their home games in The Free State Stadium in Bloemfontein. The Cheetahs would be the better equipped side under Franco Smith going into the Pro12 as they have a few more stand out players and South African internationals.

Over the last few weeks players like Raymond Rhule on the wing and Teboho Mohoje in the back row helped South Africa to a 3-0 series win over France. These internationals along with other veterans like Rayno Benjamin – who has had a successful sevens career – are very important players for this squad and would cause any Pro12 teams problems.

This season, lead by Francois Venter at out-half, haven’t had the best season only winning three out of their thirteen matches. However with the squad available to them you would have to think they wouldn’t get pushed around in the Pro12.

The Southern Kings are Super Rugby side based in Port Elizabeth in South Africa. They were formed in 2009 to coincide with the touring British and Irish Lions and with a long term goal of making it into the Super Rugby competition.

In 2013 they joined the Super 15 at the time, and didn’t have the best opening season culminating in a relegation playoff loss against the Lions. Since then they returned to Super Rugby in 2016 and are still currently competing with their next match against the Jaguares of Argentina

The side is  is coached by Deon Davids and captained by Darron Nell from the back row and so far this season they have had relative success. They are currently 5th in their conference out of eight teams and they are 12th overall out of 18 teams. For such a small and new franchise this is definitely respectable and they even have some impressive wins including a 35-32 defeat of the Sharks who are a very wel respected South African side.

Their standout player this season is Makazole Mapimpi with 7 tries from the wing and their top points scorer is Lionel Cronje with 86 points from the boot so without these two one would have to think they would be in a worse situation.

With the Cheetahs and Kings to be cut from Super Rugby, it remains to be seen if they would have appetite for competing up north, it would also require significant funding and backing form the South African Rugby Union.

The current Super Rugby tables show both South African provinces are having major struggles on the field. 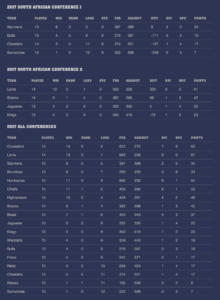 It is thought that if the South African sides join, that a new format will be adopted. Perhaps two conferences of 7 teams. Teams would play each other 3 times meaning an 18 game regular season with 9 home and 9 away games. A post season involving quarter and semi finals would also be likely.

South African teams in the Pro12 would certainly add an unknown element to the tournament and would do a lot to raise the profile of the competition. While cautious optimism would be well advised, this could very well be the shot in the arm that the Pro12 needs as it competes for sponsorship and TV rights revenues with its English and French counterparts.

We will wait and see, we could be welcoming a whole new set of fans to Limerick and Thomond Park next season and that wouldn’t be a bad thing.