On Sunday evening Monagea and St. Ailbe’s had to play out a free kick shoot out to decide the winners, without floodlights.

In what hasn’t been a good for Limerick Ladies Football, the 9am fixture controversy surrounding the ladies junior  final between Gerald Griffins and Groody Gaels was quickly followed by dissatisfaction surrounding events at Mick Neville Park on Sunday evening.

The game between St Ailbe’s and Monagea was delayed from its original start time of 5pm until 5:35 as the preceding game between Ballylanders and Feohanagh-Castlemahon had gone to extra time. To make matters worse, sixteen minutes into the game a serious injury meant that the sides had to wait 40 minutes for an ambulance to take a Monagea player from the field.

The sides finished level at St Ailbe’s 2-4 to Monagea 0-10 at normal time. Extra time could not separate them either as both sides added a single point apiece in the added period. It was decided that the game would be settled by a free taking shoot out with the light gone and the floodlights not turned on.

St. Ailbe’s selector Aideen Fitzpatrick expressed her upset and disappointment at the game was handled.

“It’s quite difficult for me to talk at the moment I’m so upset about the whole thing to be honest with you.”

“It came to full time and it was a draw. We were told there would be extra time as it had to be played last night because the final was set for next Saturday.”

Fitzpatrick makes the point that both sets of management and the referee should have rescheduled the game but the county board insisted on it finishing due to the scheduling of the final for this Saturday. Fitzpatrick added:

“In hindsight we should probably have called both teams together or at least both managements and said look, it’s getting dark what do we do here, do we reschedule? That wasn’t said and we were told again by county board along the sideline it had to be played”

With the sun well gone on what was already a darker and gloomier than usual Autumn evening both sets of players’ seasons would boil down to the next series of shots in the dark. Fitzpatrick could not understand why the lights at Mick Neville Park were not switched on.

“Sunset in Limerick yesterday was a minute past eight, no floodlights on in Rathkeale and again in horrendous conditions. Not only that but there was no umpires for our match, absolutely no umpires except the ref. Now this is a county semi final.”

“The cars were facing the pitch and all the cars turned on their lights to see could they help. Nobody on the sideline could see whether the free’s were in or not” 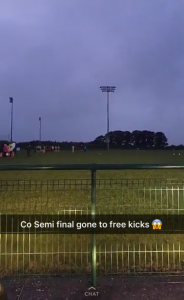 Fitzpatrick was quick to point out that this is not sour grapes with regards to the result and wished all the best for Monagea and a speedy recovery for their injured player. However she feels that her players were bitterly let down by the system on Sunday evening and that it sends out the wrong message to young girls who are involved with the game across the county.

Saturday evening in Thurles showed the very best of Limerick GAA. A team of youngsters rooted in their clubs and parishes across the county coming together for the greater good of the green and white and supported by the best set fans in the country. However what has transpired on the ladies football scene across the weekend shows that there is still a lot of work to do.

It's been over a month since round two of the football championship due to the return of hurling. ...
Read More →

Each of the eight teams were in action for the third successive weekend with the table beginning to ...
Read More →

The legends from both counties joined forces to raise money for a very worthy cause on Saturda afternoon. ...
Read More →

Following an eventful opening weekend, the second round of the 3Dental senior, intermediate, junior A and junior B ...
Read More →