At a time where there are serious concerns about the amount of young girls who are actively involved in sport beyond their school years, the fixing of a Limerick Ladies Junior Football Final for 9am in the morning is not going down well in the parishes of Loughill and Ballyhahill.

Their ladies football club Gerald Griffins are due to play Groody Gaels on Saturday 16th of September at 9am in Knockainey GAA grounds.

While the timing of the venue is bizarre to say the least the venue is another head-scratcher. Knockainey is over an hour away from Gerald Griffins meaning they will have almost twice the travel time as their opponents for the junior showpiece.

Assuming coaches want players ready to warm up approximately an hour before the game, that you would have to eat properly pre game, get a proper night sleep and account for the travel time, it will mean a 6am start for many of the panel.

The GAA to its eternal credit is the backbone of many rural communities but the upshot of the scheduling for the West Limerick communities of Loughill and Ballyhahill is that many supporters who would have travelled will now not make the trip.

Gerald Griffins were asked to accommodate a change of date for the final but said they couldn’t change. Their reasoning was that the dates for the finals were known from the beginning of the championship and players, coaches and families had made plans around those dates. Seems fair enough seeing as players put their lives on hold for long enough for the GAA during the season. It should also be noted that the club had asked for a change of date for last season’s final but were refused.

Former Limerick star and current Gerald Griffins player Dymphna O’Brien released a statement over the weekend criticising the decision. We spoke to O’Brien following her online statement to get a full picture of the story.

“Our reasoning behind not changing the date was that, back in March or February we would have got fixtures that were ratified I’m sure at a County Board meeting… It’s everyone’s dream to get to a county final, that’s what you train for. We would have made sure that our players would be available on the 16th and people organised holidays and their life around the 16th.”

“Going back to last year, we would have asked to facilitate, personally myself playing a final. It was clashing with a soccer final that I was playing in, but we were told that fixtures were set in stone and there was no lee-way given to us back then. So why lee-way is being given to facilitate a girl or I don’t know how many to play a tag rugby tournament in Cork.”

“We do see how frustrated Groody Gaels probably are but we were every bit as frustrated last year because we were in the very same situation that they are… We couldn’t facilitate them, our girls have worked around this date, that’s when we were all available so we were going with the 16th, the original date that was ratified I’m sure.”

“We understand that people aren’t going to travel and to be honest, I wouldn’t encourage people to travel. We did have an underage bus organised, our underage is important and we did organise a bus, support is great on the day but we have cancelled the bus. We wouldn’t expect parents to get children out of bed at 7am on a Saturday morning to travel to a match.”

With numbers indictating that more and more girls finish playing sports once they leave primary schools, incidents like this are harmful for those who are thinking of continuing the sport as they grow up.

“Is it worth getting up at 6am in the morning? After this I really don’t know and I certainly wouldn’t be encouraging underage players to play Ladies Football in Limerick at this time.” 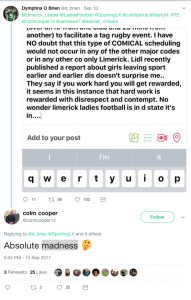 Limerick Ladies Football Board today issued statement to as they put it “provide context” to the story. In that statement they say that attempts were made to find a time that was suitable to both sides.

“Limerick Ladies Gaelic Football board would like to clarify and provide context to the Junior final fixture which has been fixed for next Saturday Sept 16th at 9 am. At the August county board meeting, Groody Gaels notified all clubs that due to clash with an international women’s rugby tournament, Groody Gaels would request a new date for the junior final, should Groody Gaels reach the final.

“Every possible alternative date was suggested by Limerick Ladies Football board during protracted discussions at the September county board meeting, but Gerald Griffins could not accommodate any of several suggested new dates, between Sept 10th and Dec 31st – citing player availability. The county board were left with no option but to hold the final on Sept 16th. In light of this, and to give both teams the best opportunity to field at full strength, the final has been fixed for 9 am on Saturday Sept 16th.

“However, as the winners do not proceed into the Munster Championship, there is no urgency in getting the fixture completed, Limerick Ladies football Board would still welcome a new date being agreed between both clubs that would allow for the throw in to take place at a more suitable time.”

However O’Brien is steadfast in her belief that ladies football in the county does not get the respect it deserves and is not progressing as it should.

“Are they trying their very best to promote Ladies football in the county? I’m not so sure what their interest is, is it players or what, I don’t know. If I was training underage players, I don’t know would I encourage them to be playing Ladies football at this moment in time. I think it’s going backwards in this county.”

You can listen to the interview in full on the link below.